You are here: Home / Products We Love / Lubriderm Men’s Lotion: The Lotion Your Man Will Love

Thanks to Lubriderm, I finally found a men’s lotion my husband loves. Joseph is very much a typical guy. He’ll use whatever lotion is available (as long as it doesn’t smell like flowers.) Even when he used lotion he would use a dime size dollar for his entire body. While out shopping I’d ask him if he there was a specific lotion he wanted but he always said no. There weren’t any men’s lotion to choose from. For twenty years Joseph was a foot courier in the City before he retired. He spent hours on his feet, walking around town, lugging packages and parcels in the snow, sleet, heat and rain. His skin was so dry and flaky and I was always nagging him to use lotion. I remember him coming home from work, so dog tired that after a hot shower, he just wanted to relax. His skincare routine was the last on his list.

Since we’ve been together, he’s made more of an effort to take care of his skin. He’s learned that when his skin feels good, he feels so much better.

Also read: 6 Tips To Unwind After a Long Day

The LUBRIDERM® Men’s collection is designed specifically for men and will leave his skin looking and feeling healthy and feeling moisturized.

Lubriderm makes a Men’s Lotion Your Man Will Love 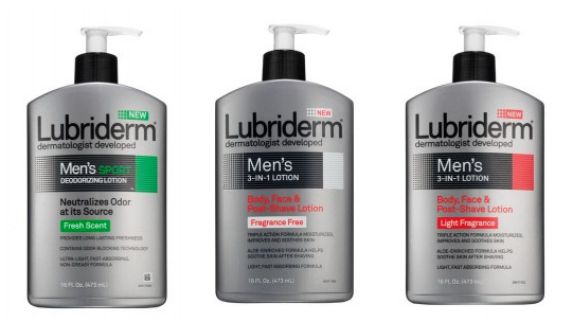 Joseph is a runner and last year he trained for the NYC Marathon. Have you ever smelled someone after they’ve ran more than 7 miles? It’s not pretty. And having to wash those sweaty stinky clothes even less. What I noticed was that on days when Joseph used Lubriderm Men’s Sport – it wasn’t as bad. Yes, he was still sweaty but he smelled fresh. Personally, I prefer Joseph with a goatee or completely clean shaven. But Joseph refuses to shave in the winter and lets his beard grow wild. Earlier this summer, he shaved it off and then started growing it again. Earlier this week, I asked Joseph to shave. I missed looking at his face. After he shaved, I reminded him to use the Lubriderm Men’s 3-in-1 Lotion. The moment he put it on, I noticed the difference of his skin. The scent was masculine but not at all overbearing.

And finally Joseph has a lotion he can call his own. He doesn’t need to smell like lavender like me or cocoa butter like Norrin – he has found his own scent. And I don’t have to share. We all win.

« I Want Star Wars: The Force Awakens To Be My Son’s First Live Action Film
Halloween at Sesame Place: The Count’s Halloween Spooktacular »