You are here: Home / Autism / Why I Want You To Take The Pledge to End the R-Word

The first Wednesday of March is the day to Spread the Word & encourage people to take the pledge to end the use of the r-word. 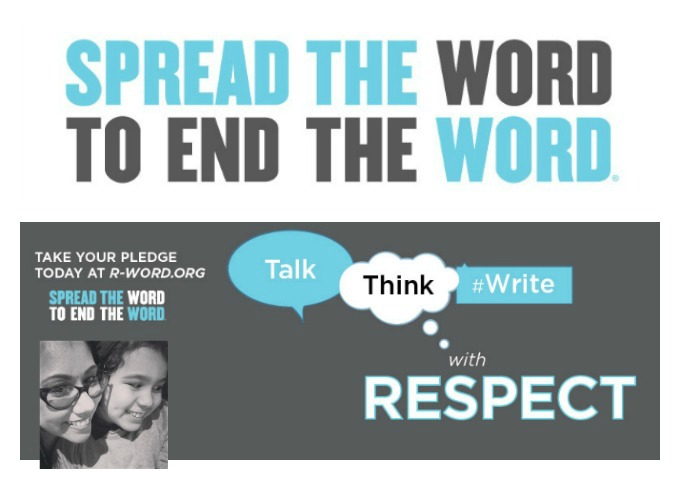 I once asked a friend if her son knew that he has autism. “No,” she said, “We’re not that kind of family.” I left it at that because I understood what she meant.

Growing up we never talked about my sister’s intellectual disability. My sister’s original diagnosis was mental retardation and on the occasion my mother referred to it, she’d say, “She’s not retarded. She’s just a little slow.”

I can’t fault my mother for not being open about my sister’s disability. My mother’s of another generation. And my sister – who is in her mid-twenties – is quite “high-functioning.” She works part-time, she goes to the gym, she takes the train by herself.

The other day we were out for a family dinner – talking and laughing the way families do. And as my sister was telling me a story, she used the “r-word” to describe something she thought was stupid.

There are times when I hear it, I speak out against it. And there are moments when I let it go. But whenever the word is used in front of my son, I can’t let it go. I will not allow anyone to use the r-word in front of Norrin. I will tell them to use another word.

Hearing my sister use the word upset me and I couldn’t let it go. She used it in front of Norrin. She used a word that degrades herself and every individual with a disability. When I explained to her why I didn’t want her using the word, she apologized. “It’s just slang,” she said.

My sister believed it was slang because she was never taught otherwise. We never talked about the r-word at all in our house.

And one of my best friends uses the word from time to time. When she uses it, I call her on it. Her excuse is usually, “I know you don’t like that word…but it’s a slang term I grew up using…”

But the r-word is not “just slang.” And it’s so much more than “not liking a word.” It’s a slur. It’s a hate speech. It’s a word meant to insult.

Related: The R-Word Has No Place in Literature

Here’s a little guide created by the Military Special Needs Network that can help. 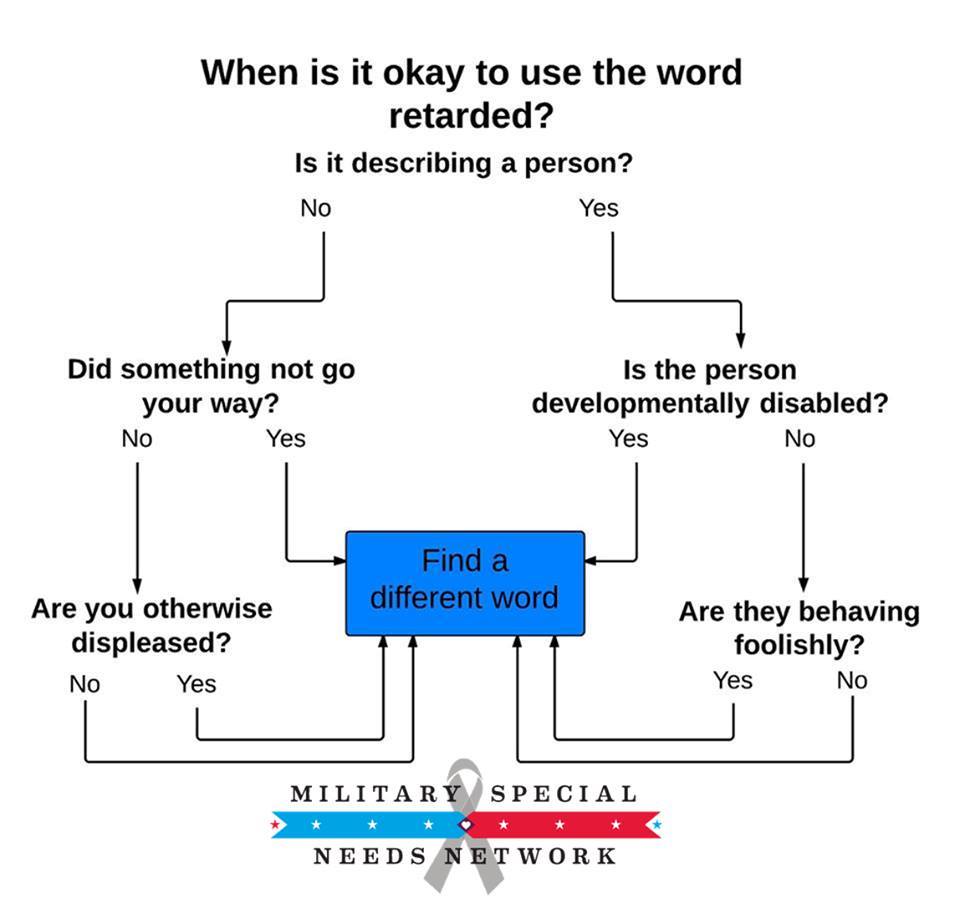 In a Huffington Post article by John C. McGinley (actor, Ambassador, Special Olympics Spread the Word to End the Word), he writes:

…however blithe the everyday practice of spicing up one’s speech with the words “retard,” “retarded” and the suffix “-tard” has become? The (presumably) unintended result is still the same. A population of people, who has never done anything to harm anyone, is circuitously targeted and suffers from a trickle-down discrimination that is very real and very painful.

My sister is a hard worker, she is a talented artist and she’s bright. She’s a young women worthy of respect, not ridicule. I wouldn’t want anyone to use the r-word in my sister’s presence and I certainly don’t want her using it.

My son Norrin doesn’t know that he has autism, he is not capable of understanding his diagnosis just yet. But we don’t whisper the word autism. One day, we will tell Norrin he is autistic. It’s not about being a certain kind of family. It’s about teaching him who he is. And teaching him to stand up for himself when he is being discriminated against.

Today is the day to Spread The Word – the annual day to raise awareness about using the r-word. I admire this online movement and those committed to taking the pledge.

But awareness needs to begin at home. We need to talk about individuals who are differently-abled and the words that we use.

Related: One Simple Thing You Can Do To Teach Your Kids About Respect (via Latinamom.me)