Norrin will be 14 in January. FOURTEEN. I can’t even wrap my mind around that. I started writing about our autism journey in 2010. He was a baby…three and a half years old. Now he’s 13. And if I’m going to be completely honest – the autism teen years, so far, have been a lot. It’s been more than a year since I’ve written anything. I’ve had post ideas and drafts in mind but life got in the way. Sitting at the computer, writing about autism and family and parenting, didn’t feel right. I felt like I was trying to be something I wasn’t, I was writing for the wrong reasons. And after the separation, I had a major case of imposter syndrome. I didn’t think I had anything to offer.

Other things happened, things that are for another post, another blog. I needed time to heal, to think and figure things out. Things are better, life has become more manageable. Slowly I’m figuring stuff out.

Part of the figuring out is handling the autism teen years. What better way to get back into blogging than to share where we’re at right now. And right now, we’re smack dab in the middle of puberty. So that’s been interesting…

For Norrin’s 13th birthday, we went to Disneyland. After our autism awareness moment on Jet Blue, I didn’t think traveling by plane with Norrin was possible. Never mind, traveling with him alone on a 6 hour flight to California. But we did it! And it was an amazing vacation.

It was nice to have that time – just me and him. We had fun. We got on rides. He loved Cars Land, obviously. But it was Norrin’s willingness to try new rides that surprised me and to get on rides that used to scare him. Our last visit to Walt Disney World – he refused to get on Soarin. At Disneyland, he rode it twice! And he typically needs some coaxing for Star Tours but this trip, he requested it and we rode it four times. 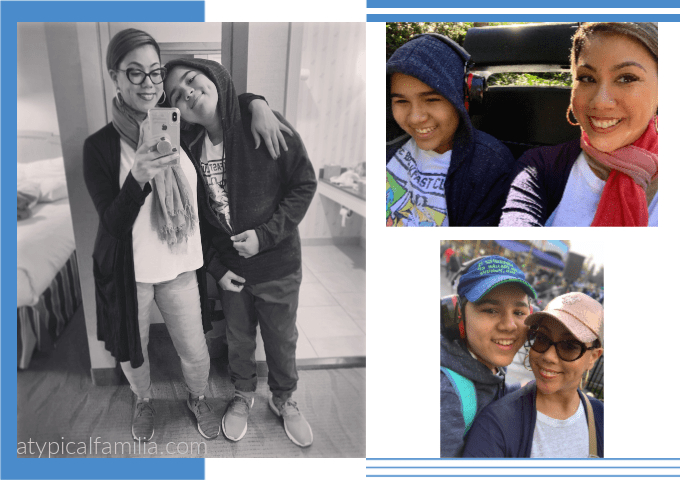 There are times when I miss him being smaller, a cuddly baby that could easily sit in my lap. Our trip to Disneyland made me realize the perks of having a teenage son. We were just able to hang out and have fun. Parenting is almost easier.

Related: 5 Things I Learned on our Mother Son Vacation to Universal Orlando Resort

When Norrin was first diagnosed with autism, I felt like Alice falling down the rabbit hole…hence AutismWonderland. I often wondered and asked if it ever got easier. For a little while it did feel like it got easier. Easier in the sense that I got better at navigating the system and getting Norrin’s needs met.

Parenting is NOT easier. Parenting a teenager with autism is not easier.

Handling puberty has not been easy, especially as a single mom.

Walking my 5’8 son into the ladies room is hard.

Assisting, prompting him with bathing, toileting and reminding him to put on lotion and deodorant. These self-help life skills continue to be taught on a daily basis.

Will there be a time when he’ll no longer need prompting for these basic day to day things?

Then there’s the teenage attitude. Which for all of Norrin’s developmental delays…the attitude is age appropriate and right on point. No delays there. He’s very much a 13 year old boy. He refuses to hold my hand, isn’t as eager to give me a hug or kiss hello. He’ll come home from school or his dads and close (slams, really) his bedroom door and asks for privacy. He’s growing up.

In many ways Norrin is very innocent. He still loves Paw Patrol and Thomas the Train (it will probably always be about Thomas). And like most boys his age, he loves video games and thinks fart jokes are funny. He’s not a “typical” teenage boy. But the reality is, he’s not a baby.

The reality is, his disability is invisible. And my son looks very much like a young man.

The reality is, the older and bigger he gets – the more scared for him I become. I worry about his future, his safety. I worry about what his life will be like when I’m gone. And then my thoughts spiral out of control and I have to reign it all in.

I can’t stop him from growing up. And while I can prepare for his future (more on that later), I am learning not to worry beyond today. I have to trust my motherly instincts, continue doing the next right thing.

Most of all, I have to remember that he makes continuous progress. Looking back at where he’s been and where he’s at now, I am reminded that all I can do is give time, time.