You are here: Home / Uncategorized / What I Learned, Loved & Admired about Cantinflas (Cantinflas Movie 8/29/14)
Disclaimer: We were invited to a press screening of Cantinflas. No other compensation was received. All opinions are our own. 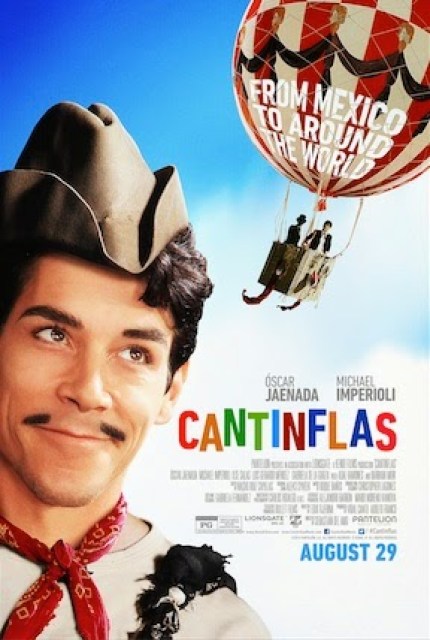 Cantinflas is the untold story of Mexico’s greatest and most beloved comedy film star of all time. From his humble origins on the small stage to the bright lights of Hollywood, Cantinflas became famous around the world – one joke at a time. Relive the laughter that has charmed generations.

“Do you know who Cantinflas is?” I asked Joseph.
“Of course I do! How do you not know who Cantinflas is?” He said.
I explained that growing up we never watched Spanish television or movies. I had never heard of Cantinflas before seeing the trailer. But as soon as I saw it, I knew it was a movie I wanted to see. I love old movies and am fascinated by old Hollywood history. And I love a good biopic. Cantinflas is everything I love about going to the movies.
Cantinflas did not disappoint. What I appreciated about the film was the way it incorporated Spanish and English while telling the story of Cantinflas and how he came to be involved in Around the World in 80 Days. What I loved was seeing so many beloved Hollywood and Mexican movie legends like Elizabeth Taylor, Charlie Chaplin, Frank Sinatra, Marlon Brando, Maria Felix and Dolores del Rio. I learned about the effort it took to make Around the World in 80 Days and how it was a first of its kind – with more than 40 cameo appearances by well known celebrities from around the world.
But what I admired was Mario Moreno aka Cantinflas. He was driven and determined in pursuing his dream. He was a brilliant performer who relied on his charm, quick wit and humor to appeal to the masses.

At the peak of his career in the late ’50s, Cantinflas was earning more than $1.5 million a year and was referred to in press releases as the world’s highest-paid comedian. — Hector Tobar, LA Times

While he was praised for being a comedian, there was a darker, more serious side to Moreno that the film revealed. What I truly admired about Cantinflas was that he refused to be exploited by Hollywood. If they wanted Cantinflas, it needed to be on his terms.
Cantinflas opens on Friday, August 29th at limited theaters and I urge you to go see it if it’s playing at a theater near you. The more people see it opening weekend, Cantinflas will be distributed at more theaters.
I especially urge Latinos to support this movie by seeing it opening weekend. If we want to see more Latinos in films then we need to put our money where our mouth is. We need to prove to Hollywood that our stories are worthy of being told.
If you are like me and haven’t heard of Cantinflas – I assure you, you will walk out a fan. And if you’ve never seen Around the World in 80 Days – you’ll want to rent it (I did). If you’re Latino, take your mother, father or grandparent – they will most likely remember Cantinflas. If you don’t understand Spanish – no worries, there are subtitles. Cantinflas is more than a movie about a Latino actor, it’s a testament to Hollywood history that needs to be told.

« Stay & Play at Sesame Place: A Family Fun Getaway!
An Afternoon At The Please Touch Museum »