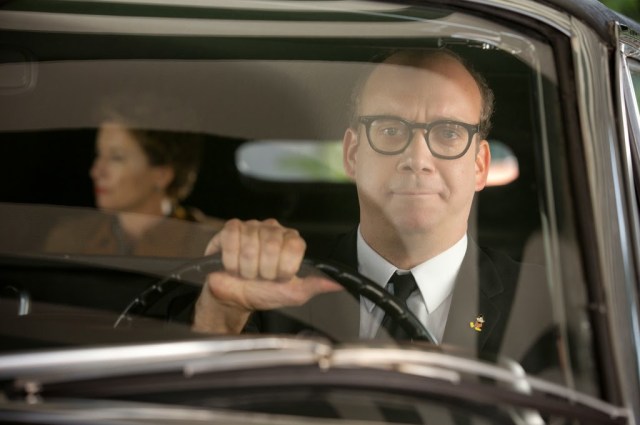 It’s Sunday morning. I’m sipping my coffee, listening to the gurgle and hum of the washing machine and watching Saving Mr. Banks. Again. I’ve sort of been watching it non-stop since we picked it up last weekend. I’ve watched the special features and the deleted scenes.

I remember seeing it in the theater and being incredibly moved by the story. (translation: I was ugly crying.) I have always loved Mary Poppins. It’s the kind of movie that makes me happily tap my feet and want to go fly a kite.

But I knew nothing of the origin. I didn’t know that Mary Poppins was based on a popular book series. Nothing of P.L. Travers. It was just a name I overlooked during the opening credits.

Saving Mr. Banks is the kind of movie that will make your heart break and rejoice. I love everything about it. But there were two moments in Mr. Banks that really resonated with me.

It’s the relationship between P.L. Travers and Ralph, the chauffeur. The scene where Ralph reveals his daughter, Jane, has “problems” (she’s in a wheelchair) – I lose it. Every. Single. Time. Ralph explains why he always comments on the weather and loves sunny days because it means his daughter can sit out in the garden. Ralph was the character I identified with the most. He says what so many special needs parents have in the back of their mind – that it’s easy to worry about her future, but he can only worry about the present. “Only today,” he says. And while he says those words with conviction, there is still uncertainty in his eyes. (That’s the power of great acting.)

And then there was the scene when P.L Travers gives Ralph a list of famous people (Frida Kahlo, Albert Einstein, Van Gogh, Roosevelt). When Ralph questions the list, Travers says, “They all had difficulties. Jane can do anything that anyone else can do, do you understand?”

I was curious about Ralph and wondered if that part of the story was real. According to History vs. Hollywood and Glamour.com, Ralph (Paul Giamatti) is “an amalgamation of several of P.L.’s drivers…the character was included in the film because the screenwriter and the producers wanted someone who P.L. Travers (Emma Thompson) could warm up to.”

The producers could have used any number of story lines, but I am happy that they used a special needs parents aspect to give P.L. Travers humanity and warmth. It’s a moment of transformation. I would loved the movie either way, but Paul Giamatti’s character gave me something to identify with and his relationship with P.L. Travers gave me something to be inspired by.

Have you seen Saving Mr. Banks yet?


image: via Disney.com
Sharing is caring...

« 6 Things I’ve Learned From My Child
Friendship Is Precious. And I Want My Son To Have a Friend. »