You are here: Home / Uncategorized / 6 Things I’ve Learned From My Child

***
I didn’t know anything about motherhood when I got pregnant with my son, Norrin. During my preganancy I read many books on how to be a mother to a newborn. Books on bottles, breastfeeding and how to get baby to sleep through the night.
Once Norrin was born, I held him each night dreaming of all the things I’d teach him. I wanted him to be better than me. I wanted him to have every opportunity I never had. I wanted him to learn from all of my mistakes.
I knew I had a lot to learn about being a mother. I took for granted that Norrin had a lot to learn from me. Not once did I ever think about all the things I could learn from my child. The truth is, I’ve learned more things from my 8 year old son than from any book I’ve ever read, any mistake I’ve ever made or person I’ve ever met. 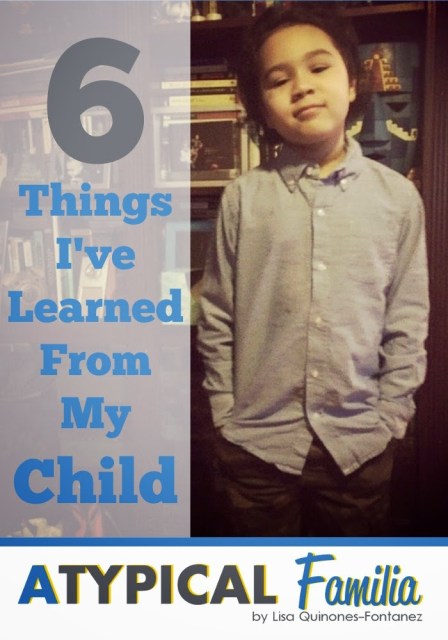 Being Norrin’s mom these last 8 years, I’ve learned to:

Let Go. I used to be all caught up with milestones. I worried when Norrin wasn’t speaking by 2 years old. And while I was right to be concerned. I had to learn to let go of when he was supposed to do things. I let go of the parenting rule books that set the timetables and learned to accept that Norrin will achieve things in his own time.

Go On. Three years ago I had a miscarriage at 16 weeks. After coming home from the hospital, I fell into a deep depression. I didn’t want to do anything except lay on the sofa and cry. I didn’t want to talk to anyone or do anything. In those weeks that followed my miscarriage, Norrin was my reason for living. And I learned that even after experiencing such a devastating loss, I could go on.

Imagine. I used to pride myself on my imagination. But when Norrin was diagnosed with autism, I could not see beyond our current moment. At the time he was diagnosed, Norrin had no language and had a significant global developmental delay. Watching Norrin’s progress has taught me to really imagine living life with unlimited possibilities.

Enjoy the Moment. I work. I write. I’m a mom. I have a husband. I am constantly on the go. One of the luxuries of being a kid is not having any kind of real responsibility. I am always amazed by how easily Norrin is amused. I mean, a ride up and down the escalator can make his day. Being his mom, I’ve learned to slow down and just enjoy the present moment.

Try. Norrin works so hard to master the things that come so easily to other kids. He doesn’t usually get things the first or second time. It takes hard work. And I am in constant awe of his ability, determination and commitment to try. To keep trying even though he’s having difficulty. I’ve learned that if Norrin can keep trying to achieve a goal, so can I.

What have you learned from your kids?

« “Not So Different” – An Inspiring Song By Cassandra Kubinski To Raise Autism Awareness
The Unexpected Special Needs Moment in Saving Mr. Banks »