Disclaimer: We were invited to a premier screening of Star Wars Rebels: Spark of Rebellion and Family Fun Event. No other compensation was received. All opinions are our own. This post was written by Joseph aka Atypical Dad. 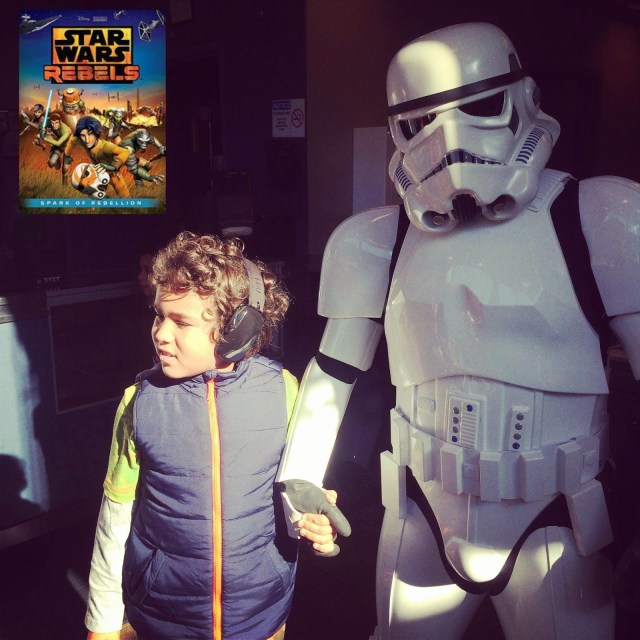 Last week The Boy and I attended the premiere of Star Wars Rebels. We were greeted at the door by Stormtroopers of the 501st Legion and other various characters from the Star Wars Universe.

There was a craft table for the kids to cut and make Yoda ears or Princess Leia’s hair buns to wear.

But The Boy was most interested in the face painting table. When he sat down he immediately pointed to the Darth Maul picture. I guess he has a little Sith in him. I enjoyed experiencing this with him as I felt I was sharing a bit of my own childhood with him.

One of the big mainstays of my life has been the Star Wars franchise. Having experienced this series from the release of A New Hope (in 1977) to Revenge of the Sith (in 2005) is a testament to the longevity and appeal Star Wars has with its fan base.

The vast universe and characters lends itself to many possible story lines. If you are a fan like me (who will name their kid after Luke Skywalker) you have many questions about how all the movies connect. Like – what happened between the events of Revenge of the Sith and A New Hope. Hold on to your blasters, Disney’s Star Wars Rebels is looking to do just that.

Set in a time where the Imperial Forces now rule the Galaxy we are introduced to a new cast of characters on the planet Lothal. Starting with Ezra Bridger the inhabitant of the planet and also the protagonist of this episode. He encounters what looks to be his future partners in rebellion the Jedi Kanan Jarrus, a Mandalorian Sabine Wren, a Twi’lek Hera Syndulla, and a Lasat rebel named Garazeb Orrelios. Together onboard their ship The Ghost the group become involved in an adventure involving breaking out Wookies captured by The Empire.

In typical Star Wars fashion, the action is fast paced, the dialogue humorous, and the music and sound effects are goose bump inducing. There is even an appearance by an old friend in holograph form, but I’ll let you see who that is. In all, Star Wars Rebels aims to bridge the gap between the movies and the pilot episode left enough to have me come back for more.

A Long Time Ago, In A Galaxy Far, Far Away…Against the might of the Galactic Empire, an unlikely band of heroes emerges to renew the fight for freedom. Star Wars Rebels, set five years before the events of Star Wars: Episode IV A New Hope, tells the story of the Rebellion’s beginnings while the Empire spreads tyranny through the galaxy.

Disclaimer: We were invited to a premier screening of Star Wars Rebels: Spark of Rebellion and Family Fun Event. No other compensation was received. All opinions are our own. This post was written by Joseph aka Atypical Dad.

« Reflecting On Halloweens Past & Boo At The Zoo
Folr: The Family Locator App To #WatchOverYourLovedOnes {#ad} »