So it’s that time of year again when I make bold nonsensical predictions for my favorite team, The New York Football Giants, and what I think they will do in this year’s NFL draft. It’s also when the organization ignores everything I recommended, but I’m still working on my private line to Jerry Reese. So this should be frustrating and fun.

Seeing as this is my third attempt at trying to get it right maybe the third time’s the charm? But I highly doubt it. I’m hoping that if a talent like Lael Collins, Laremy Tunsil or Vontaze Burfict is sitting there for The Giants that they take a chance to fill a need with an impact player. Part of being a “class organization” is the willingness to give someone a second chance and opportunity to prove the naysayers wrong. Or maybe that is my own naïveté.

So with that being said let’s get this year’s “Light it up Big Blue Five Round NFL Mock Draft” started. Wow! That’s a mouthful. 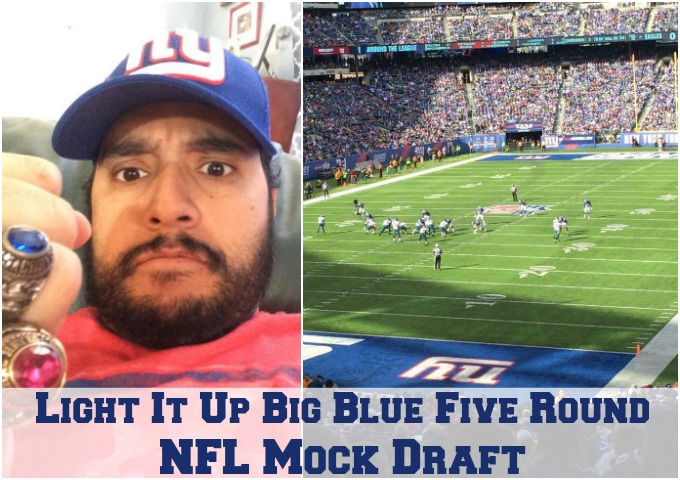 So it seems that the trendy pick for the Giants this year at this spot is offensive line. Specifically the left tackle position. Ryan Ramcyk, Cam Robinson and Garrett Bolles seem to be the most popular picks. But if you think about how valued left tackles are in the league and the fact that this year’s best left tackles are projected to be taken in the late teens and early twenties then I feel you have to go the best player route and not just fill a need.

I’m not ready to give up on Ereck Flowers at this point. The fact that he is only 23 means he has only scratched the surface of his potential. So it’s best for the Giants not to reach for a pick just because they feel Flowers is not a solution at this time. He’s still growing and will get better.

That’s where Cook comes in. Now this can change if the Giants sign LaGarrette Blount. Then I’d change this pick to Ruben Foster, in my dreams he’d be there, but if they don’t then Dalvin Cook would be the kind of back that the Giants need. He has great vision, patience at waiting for gaps to open up, and is able to elude defenders that blow up plays in the backfield.

With the question marks on the line he’s the kind of back you want with the ball that can create something out of nothing. A running back by committee of Cook, Perkins, and Vereen would likely propel the Giants upward significantly from where they were last year in rushing yards per game.

Last year I projected the Giants to pick OSU linebacker Derron Lee in the first round. Would you believe that they didn’t listen to me? My telepathic connection to Jerry Reese must have been cut off. No wonder he was wearing Magneto’s helmet. Well he has a chance to make it up to me this year with this pick. At 6’2″ 240 pounds McMillan has the size variables one looks for in a middle linebacker. He’s quick off the ball and has the speed you look for to get around blockers and make plays.

Playing for a big time program means he’s gone up against good competition which will help his transition into the NFL. And going to New York would boost his street cred because Wu Tang Killa Beez would approve of this pick by making him an honorary member. I made that last part up but come on. How cool would that be? Or Beez? A perfect pick for us in the “Beezer Brigade.”

Now here’s a good spot for the Giants to look for offensive line help. At 6’6″ 302 pounds Garcia is a monster of a man. Not as strong as someone you’d want playing offensive tackle it’s his athleticism that makes up for any of the deficiencies in strength.

Strength is something that can be addressed in the weight room. It’s his ability to lock up on pass rushers and not be beaten on the edge that makes him an intriguing prospect and if still available at this point would make him a steal. He could eventually take over the left tackle spot and with Flowers at the right tackle the Giants would have a young core offensive line that would be formidable for years to come.

I’m not sure he’s Latino but Garcia on a Giants jersey would just make me happy.

This draft pick may or may not be for comedic purposes, but (no pun intended),the prospect of a Giant Butt is too much for me to pass on.

Comedy aside the Giants are not completely sold on their roster of tight ends (hee hee hee), and could use an inline blocker that can add something to the offense in terms of being a down field threat. His blocking could use work but (no pun intended), he’s a move the sticks kind of tight end. Besides the Giants signed Rhett Ellison this offseason to take the role of blocking tight end (hee hee hee). Butt suffered (hee hee hee), a torn ACL in the Citrus Bowl so there are no guarantees how healthy he’ll be next year.

I think the Giants could stash him on IR and have him back next year while giving the tight ends (hee hee hee), on the roster a chance to prove they are viable options. If no one proves to be the answer, then Butt can (hee hee hee), step in and possibly be that answer. I’m not a praying man, but (no pun intended), I’m praying that Giant Butt becomes a reality.

Losing Jonathan Hankins to the Colts left the Giants without a complement to “Snacks” Harrison on the defensive front. With that a replacement is in order and Johnson could fit that bill

A former Brooklynite this would be a sort of a homecoming for him and he would bring a skill set not necessarily made for run stuffing, but suited to the NASCAR packages Steve Spagnoulo likes to use. Weighing in at 316 pounds he’s not small so having him in on running downs is not out of the question.

However his ability to disrupt plays in the backfield and create pressure up the middle would provide JPP and Olivier Vernon what they need in hunting down quarterbacks that are flushed out of the pocket. Another value pick at this point of the draft, and if he’s there Jerry Reese needs to sprint to that podium.

« Autism Awareness Month: It’s Complicated
13 Thoughts I Had While Watching 13 Reasons Why »