You are here: Home / Atypical Kid / He Said What?! 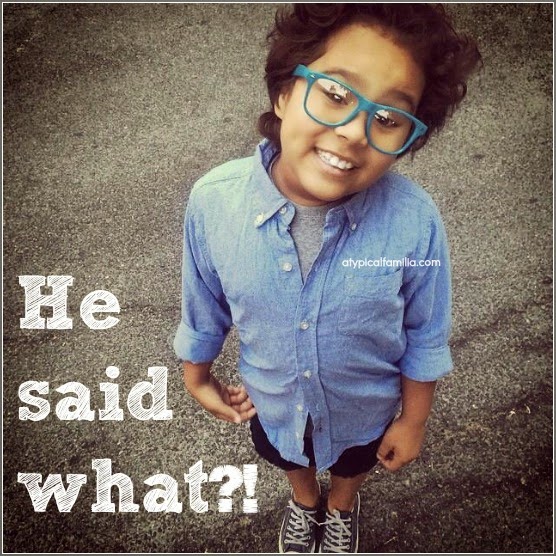 I share many of these moments on my personal Facebook page and occasionally on my Facebook blog page. I rarely write about it because it’s usually never enough to fill a post. But I wanted to share these little slice of life moments that make me laugh because they are things that I think back to when times get tough. I hope they make you smile too.

One afternoon we decided to pick up a quick dinner at Wendy’s. Instead of ordering at the drive-thru, we parked the car and went inside. I sit down at a table with Norrin while Joseph goes to the counter to order food. A few minutes pass and Norrin yells out, “Where’s the waiter – I want to order a burger.”

He said what…when I tried to comb his hair.

Norrin has curly hair and it needs to combed as soon as it’s washed or else it gets knotty and tangled. As I began combing through his hair, he pushed my hand away and said, “I got this.” My heart may have broken a little.

He said what…when the doorbell rang.

It’s no secret that I don’t cook often especially during the week. We rely on my mom, Trader Joe’s microwavable meals and take-out. We live in an apartment and we rarely have company. Usually when the doorbell rings its either a therapist or someone delivering something (either food or a package). One evening after a therapist left, the doorbell rings and Norrin yells out “Hooray – it’s Chinese food!”

He said this in front of my mother.

He said what…when he wanted to use the iPad.

We have to change the passcode on the iPad often because Norrin figures it out and then never gives the iPad an opportunity to fully charge. Yesterday we changed the passcode. When it was fully charged, Norrin brought it over to me and said: “Hey Mama, what’s your favorite passcode? Come on, you can do it. I won’t peek.” Isn’t it sweet that he encourages me to do something for him?

There are times when Norrin’s speech is scripted but these exchanges are completely spontaneous. I think that’s why I appreciate them because it reminds me of all the progress he has made. Share something your kid has said that has made you laugh out loud.