You are here: Home / Binge Worthy / Netflix Gets It Right with Atypical

Disclosure: I’m part of the Netflix Stream Team and I got to view the entire Atypical series. All opinions are my own and have not been influenced in any way.

Atypical is a coming of age story that follows Sam (played by Keir Gilchrist), an 18-year-old on the autistic spectrum as he searches for love and independence. While Sam is on his funny yet emotional journey of self-discovery, the rest of his family must grapple with change in their own lives as they all struggle with the central theme: what does it really mean to be normal? Jennifer Jason Leigh stars as his mother, Elsa, who is on her own journey of self-discovery. Michael Rapaport plays his father, Doug. Brigette Lundy-Paine (Margot vs Lily, The Glass Castle) plays Sam’s sister Casey and Amy Okuda (How to Get Away with Murder) plays his therapist Julia. 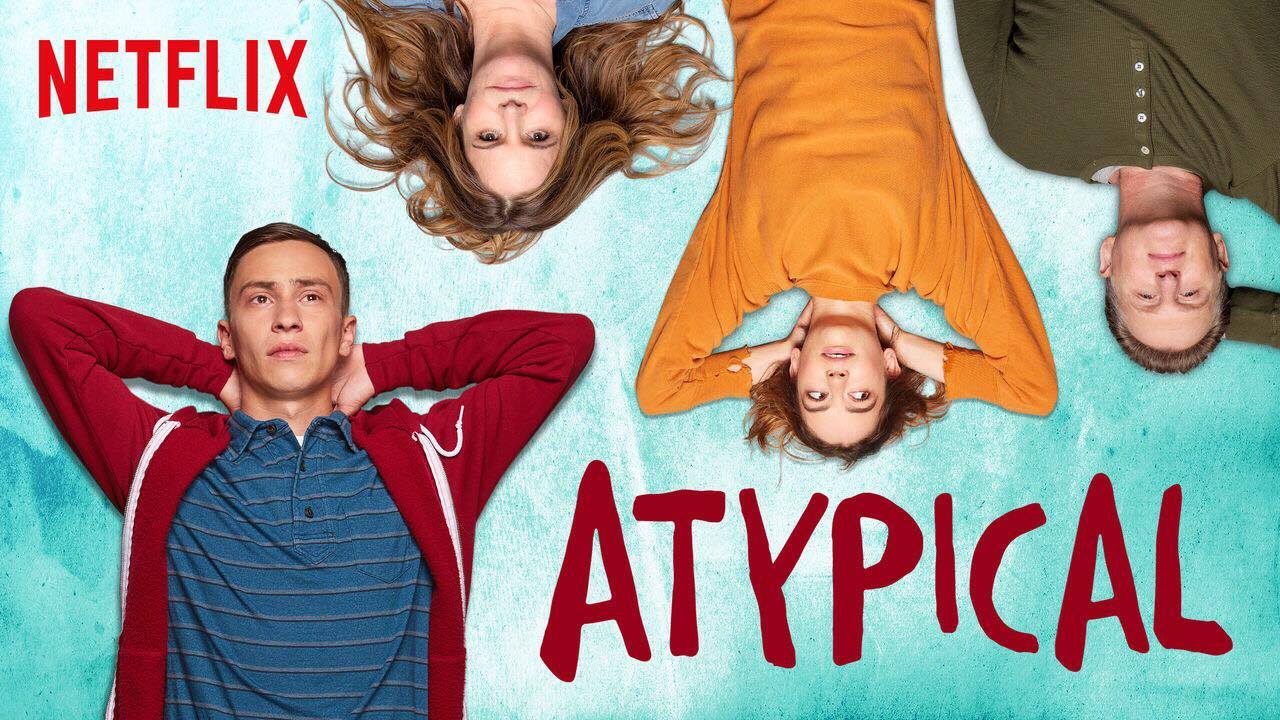 A few weeks ago, I shared on FB that I got to see the first three episodes of Atypical. Within seconds, someone left a negative comment. I don’t know why I was surprised. If a show or movie features an autistic person there’s always criticism. And it’s always the same…

Norrin’s autism is nothing like Sam’s. I’m not a stay-at-home mom. I’m not a regular at support group meetings. Norrin is an only child. Our family is (almost) nothing like The Gardner’s. But that doesn’t mean I can’t identify with the characters. And for all of our differences, there were many similarities. Similarities that went beyond autism.

Obviously, I was initially intrigued by the idea of an autistic character but Atypical goes way beyond an autism coming of age story. You don’t need to know someone with autism to appreciate the show or identify with any of the characters.

I laughed. I cried. Atypical is all the damn feels.

At first, I wasn’t really feeling Michael Rapaport and Jennifer Jason Leigh. I didn’t buy them as a married couple. By the end of the series I was digging Doug and empathizing with Elsa. I understood them, as a couple and as individuals – their frustrations, worries, personal struggles, as well as the love they have for each other. There were lines of dialogue that were gut punching.

Like the scene where Elsa is describing someone she recently met and she says something like, “…he represents a life I’ll never have.” I know exactly what that feels like. And it’s a tough thing to say out loud.

Or when Doug and Elsa have a date night… Just thinking about that scene makes me emotional. I felt the flaws in their marriage because so many of their flaws and conflicts reflect my own.

But there were also many moments of tenderness and love. They’re a couple trying to hold on in spite of the hardships and obstacles. That’s not something you see a lot in television. 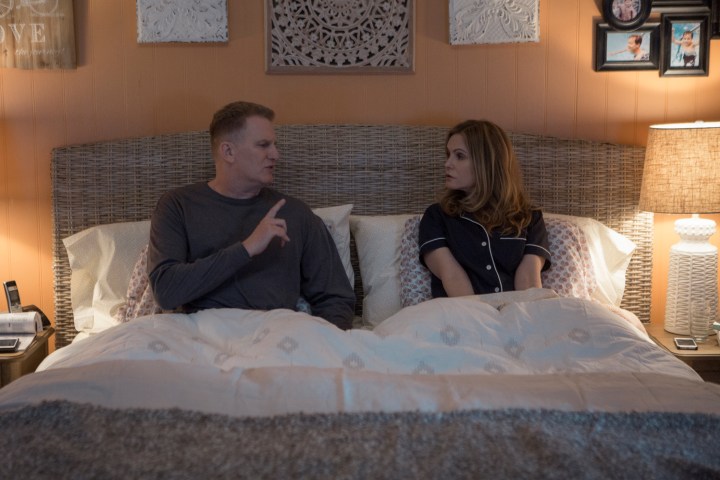 The sibling relationship between Sam and Casey is on point. Having a sibling with autism can be challenging – especially when you’re the younger sibling. Casey’s relationship with her older brother Sam was special to watch. She’s fiercely protective of him but at the same time, she argues with him and makes fun of him – the way siblings do. When Sam expresses his interest in dating, Casey is both (playfully) insulting and genuinely encouraging. One of my favorite moments between them is when they’re at school. Casey made a snide remark about Sam’s new shirt and immediately followed with “Find me at lunch, if you have no one to sit with.” And it is Casey’s responsibility to Sam that creates her own inner conflict. 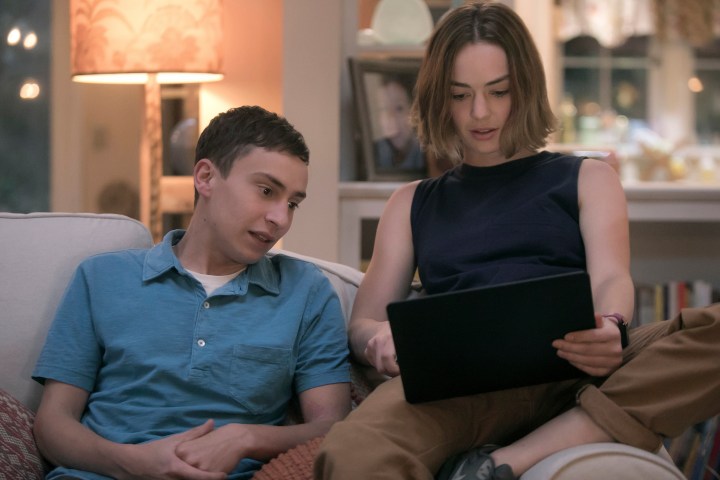 And then there’s the autism.

Sam is high functioning. I don’t like to use that term, but I don’t know any other way to describe him. He’s able to go to a “typical” high school and sit through mainstream classes. If you’ve been following along for a while, you know this is not our autism experience.

But there were things about him that reminded me so much of Norrin. Sam wears headphones, he fidgets and there’s heartbreaking moment when he has a major meltdown. And Norrin, similar to Sam, has been expressing his need for independence. I’m struggling to give it to him. So I understand why Elsa is freaking out at the idea of letting Sam go.

Related: When Your Kid with Autism Wants Independence

Netflix definitely got it right with Atypical. It’s heartwarming, heartbreaking and hopeful.

I know many autism parents are hesitant about Atypical. Don’t be. Give it chance. It’s more than worthy enough to be your next binge. 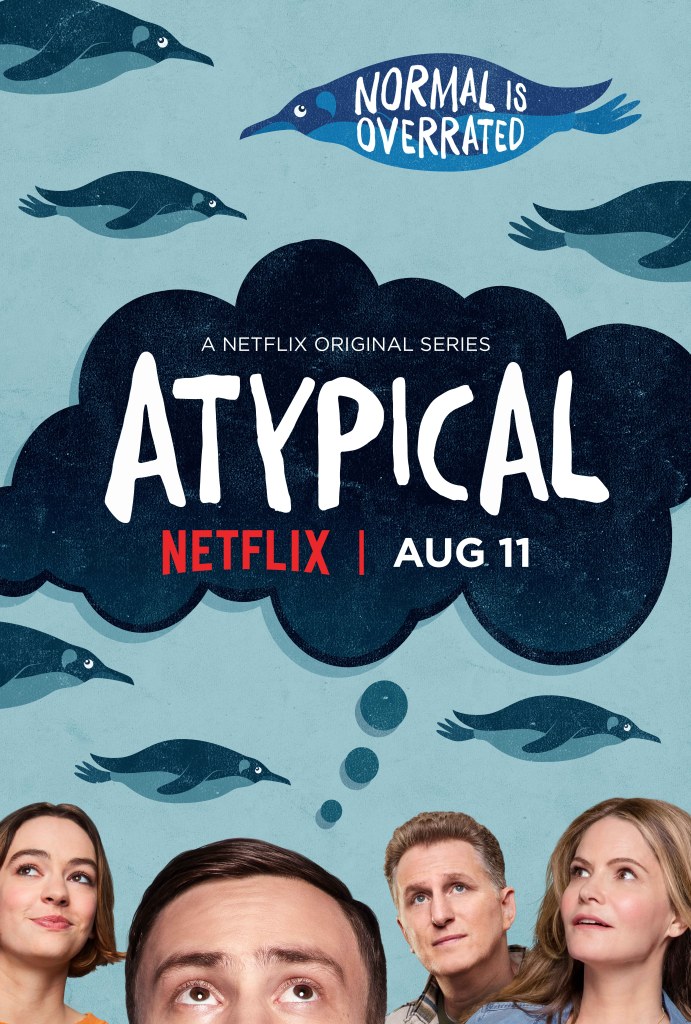 « Back to School Tips to Help Your Child with Special Needs
Beauty Box Subscriptions Pros & Cons: Boxycharm vs. Ipsy vs. Play! by Sephora »