You are here: Home / Uncategorized / Our North Pole Adventure at Westchester’s Ridge Hill {A DreamWorks DreamPlace} 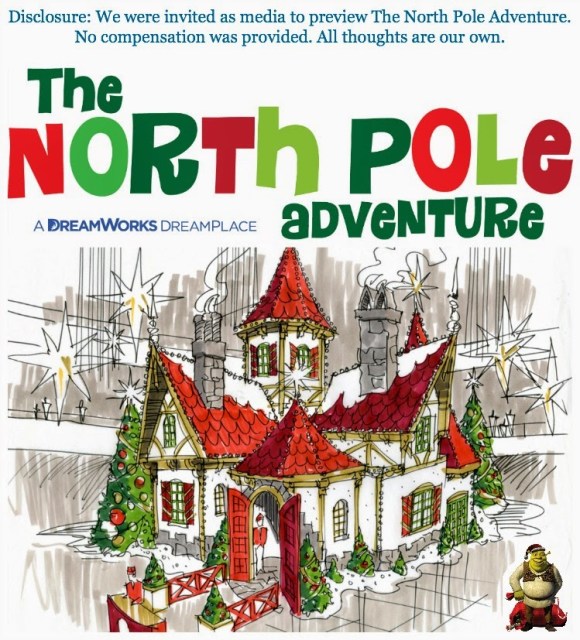 If you follow our Familiagram, you know that Westchester’s Ridge Hill is one of our favorite places to hang. We shop, eat and play there. Less than 30 minutes from The Bronx, Ridge Hill feels like no other mall in New York.


Ridge Hill is ready for the holiday season and it’s created a DreamWorks DreamPlace –
The North Pole Adventure.

As soon as we arrived we were greeted by Shrek. We received our passports and entered the beautifully decorated house. Not really knowing what to expect, I thought we’d walk around a house and meet Santa, take a picture and that would be it. I was wrong.

We were taken on a journey. We entered the design lab to create (and name) our very own sleigh – this would be the sleigh that would take us on a magical journey guided by Shrek and his pals to the North Pole. We were now ready to board our sleigh – the Sonic Chrome – and head on our journey!

Inside another room, we boarded a sleigh that featured “leather cushioned seats, a red body with gold filigree, and curled silver runners.” At first Norrin was a little nervous but after a few seconds he was totally into it! It was an “immersive, cinematic adventure featuring a wrap-around screen and motion based effects.” (It’s less than 10 minutes) We arrived at our destination and taken to the meet the man himself – Santa Claus. We got our picture with Santa and made our way to a little gift shop where we bought Norrin a souvenir – a Toothless t-shirt, his favorite dragon from How to Train Your Dragon.
What I loved about the The North Pole Adventure is that it combined story-telling, technology and imagination. It was so cool – like nothing we’ve ever experienced!
So…how do YOU have your own North Pole Adventure? Book your appointment at http://www.westchestersridgehill.com/info/santa-shrek or download the DreamWorks DreamPlace app.
As of now, there isn’t an “autism/sensory friendly” day or evening scheduled. I attended a private media event so I’m not sure how crowded it will get. BUT if you make your appointment early in the morning (and within the next few weeks before the Christmas rush really kicks in) it may be more manageable.

Check out a few of our pics from our day!

We are on a North Pole Adventure @shopridgehill – #Holiday14 #DreamworksDreamPlace
A photo posted by Lisa Quinones-Fontanez (@laliquin) on Nov 11, 2014 at 2:47pm PST

Shrek welcoming us to our #NorthPoleAdventure @shopridgehill
A photo posted by Lisa Quinones-Fontanez (@laliquin) on Nov 11, 2014 at 6:54pm PST

We got to hang with Shrek @shopridgehill – #DreamworksDreamPlace
A photo posted by Lisa Quinones-Fontanez (@laliquin) on Nov 11, 2014 at 2:58pm PST

Someone is excited to go on a sleigh ride to meet Santa! @shopridgehill #DreamworksDreamPlace
A photo posted by Lisa Quinones-Fontanez (@laliquin) on Nov 11, 2014 at 3:41pm PST

A rare photo of us 3 @shopridgehill #DreamworksDreamPlace #atypicalfamilia
A photo posted by Lisa Quinones-Fontanez (@laliquin) on Nov 11, 2014 at 3:46pm PST

🎶It’s beginning to look a lot like Christmas🎶 @shopridgehill #DreamworksDreamPlace
A photo posted by Lisa Quinones-Fontanez (@laliquin) on Nov 11, 2014 at 6:50pm PST

Disclosure: We were invited as media to preview The North Pole Adventure at Ridge Hill. We were not provided with compensation. All opinions are our own.
Sharing is caring...