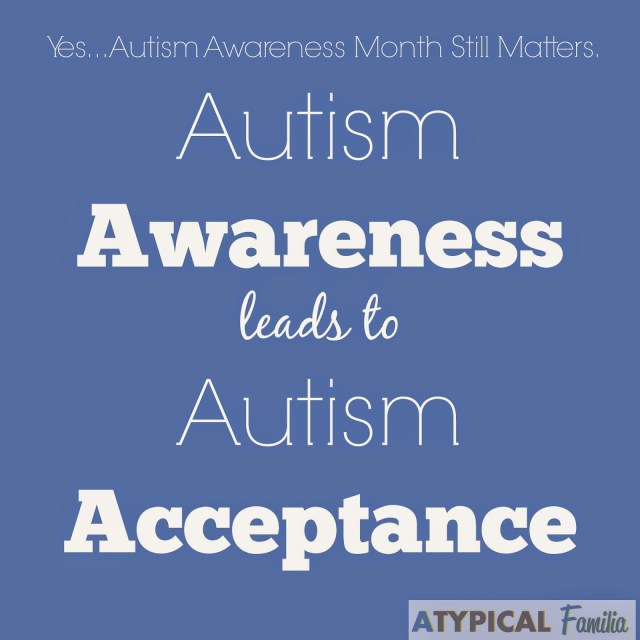 During a time when everyone seems to be vying for the same thing, April seems to create an even greater divide within the autism community.

Lighting it up Blue and the Puzzle Piece implies you support Autism Speak – an organization that many people are against. I get it, I do. I myself don’t always agree with Autism Speaks. Autism Speaks strives for a cure, they search for a cause. They can promote fear. And they seemingly ignore the needs of autistic adults.

But Autism Speaks also does a lot in the community. They reached out to the Black and Latino community with their Maybe campaign. They fund family friendly events and venues and make them accessible to autism families – sometimes these events are free. How many other major charities are doing that? Autism Speaks has its flaws but they do provide a valuable service. One that my family has benefitted from on several occasions.

Earlier this month, Chili’s wanted to host an Autism Fundraiser evening. A percentage of the evenings revenue would be donated to the National Autism Association. This caused major upset, as the NAA website claims that vaccinations can expedite autism in “some, if not many, children.” A petition was started against Chili’s for supporting an organization that is anti-vaccine. As a result, Chili’s cancelled the fundraiser event.

I’m pro-vaccine. I don’t believe vaccines cause autism. But I would have attended the event at Chili’s. Because the NAA also does a lot to educate families, educators and law enforcement on wandering prevention and response.

The petition backed Chili’s into a corner. Which is kind of messed up because they were trying to do something good. Since they cancelled the event – no one benefitted. How is that fair? For as many people willing to boycott Chili’s – there would have been just as many people supporting them. And the petition could deter other companies from wanting to support Autism Awareness Month or any autism charity in fear of such retaliation.

Many think we should refer to April as Autism Acceptance Month. There are so many myths and misconceptions surrounding autism. How can we move forward to acceptance when there is still so much awareness that needs to be spread? It’s like getting married before going on a first date.

Ironically many of these individuals who rally for Autism Acceptance Month are unwilling to accept or respect other individuals stance on autism. There is so much arguing and ugliness and name calling within the autism community that – quite honestly – appalls me.

Autism Awareness Month still matters because it’s a reminder for all of us. It reminds people outside of the community that autism exists; it’s a time to learn what autism is and what it isn’t. And it should remind us within the community that there are many views and beliefs when it comes to autism. I like to say that I am autism aware everyday but I’m aware of our autism. Autism Awareness Month should remind us that each of our journeys are different and that we should respectfully agree to disagree.

Let the Autism ACCEPTANCE begin within our community and then we can move on to everyone else.

« Confessions from the Fitting Room: Searching for a Swimsuit
10 Reasons to LOVE Call the Midwife »