You are here: Home / Blogger Life / Highlights & Takeaways from #WeAllGrowNYC [in Tweets] 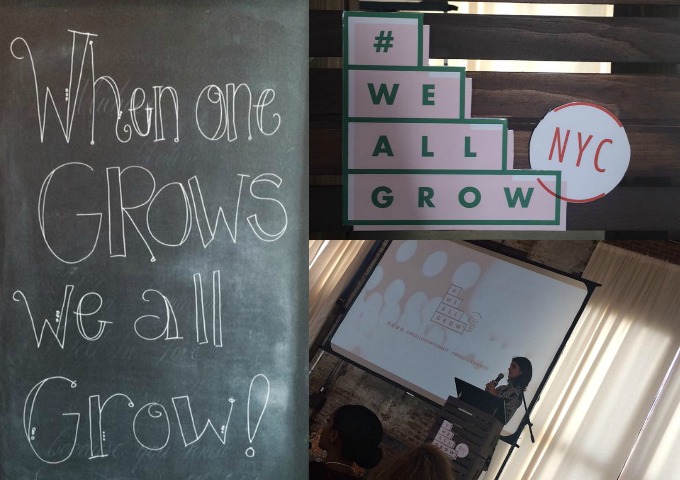 If you know me in real life you know that I am not a fan of taking the subway on the weekends – least of all on a Sunday. I like my lazy day Sundays. Yesterday, I trooped it all the way out to Brooklyn from The Bronx. That’s about a 90-minute subway ride (each way).

But if you’ve ever met Ana Flores, you know that she’s all about growth and empowerment. I can’t tell you how often I’ve heard Ana say, “When one grows, we all grow.” It’s more than just a motto, it’s her mission. When I think about my growth as a blogger, I think about Ana and Latina Bloggers Connect.

'When one grows, we all grow.' It's more than just a motto, it's @LAFlowers mission. #WeAllGrowNYC Click To Tweet

Last year I had the opportunity to attend the inaugural #WeAllGrow Summit in LA. From the speakers, to the sponsors, to the Storytellers, to the attention to details – it was all on point. Quite honestly, it’s the best blogging conference I’ve ever been too.

The day tickets went on sale for #WeAllGrow 2016 (in Long Beach) – I bought my ticket and booked my hotel reservations. I was not going to miss out. And I definitely wasn’t going to miss out on the chance to have my favorite blog network on my coast.

Think about ways to repurpose content. Treat every social media channel as a new way to tell your story. @EmmelieDeLaCruz #WeAllGrowNYC

The Power of Pinning with Enid Hwang, Pinterest Community Manager

“The re pin is a powerful @Pinterest tool.” It could live on a board forever. @eeeeenid #latinapinfluensters #WeAllGrowNYC

Q & A with Zuania Capó and Marie Chalita

So important to not forget=> You are your brand. – @MarieChalita #WeAllGrowNYC

Advice from @soledadobrien to @IAmLisaPrice: Interview yourself, and you can get the conversation back where it needs to be. #WeAllGrowNYC

What I especially loved about #WeAllGrowNYC is being in a room filled with passionate, hardworking women. I got so much in only a few hours, I just know that #WeAllGrow 2016 is going to be amazing. Hope to see you there!