You are here: Home / Autism / The Transition to Kindergarten When Your Kid Has Autism

Norrin’s transition to kindergarten was a 3 year process. This is our Turning 5 experience.

When Norrin was diagnosed with autism in 2008, I felt like I had fallen down a rabbit hole. By September 2010, I had found myself in the darkest corner of the deepest hole. I had lost a baby during my 14th week of pregnancy and it was Norrin’s last year before starting kindergarten. As a way of coping with my depression, I returned to graduate school. And one of my course assignments was to establish an online presence as a writer. That’s how my first blog was born.

I created AutismWonderland to chronicle the transition to kindergarten. 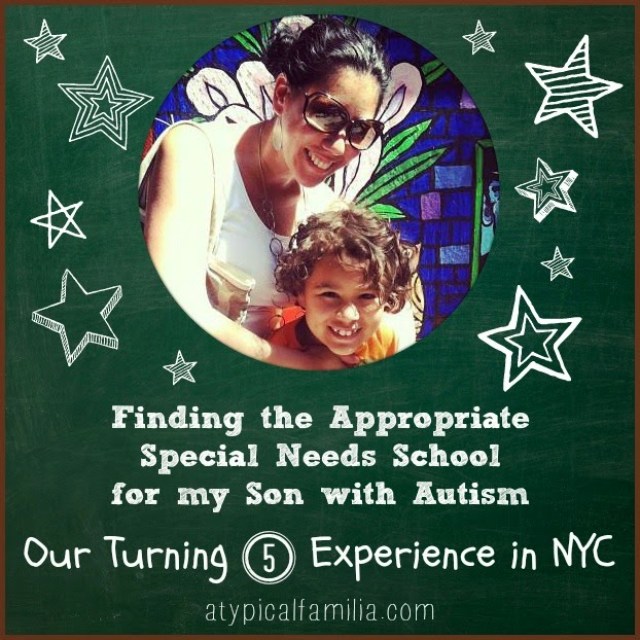 The blog was meant to be just a semester project. But by December, I felt the need to continue. Between 2010 – 2012 I wrote about the schools I toured, the application process, the rejection, the search for an attorney, filing for an impartial hearing/suing the Department of Education and Norrin failing kindergarten. Those two years were the most trying of my life.

Also read: Finding the Appropriate School When Your Kid Has Autism

Last year I launched Atypical Familia because I found myself emerging from the rabbit hole and I felt it was time to start over.

I’ve since connected with a support group of autism parents in The Bronx. Many of them are going through the Turning 5 process. And it has brought back so many memories. Being in that moment makes it so hard to see the light at the end of the tunnel.

Many have asked me about my experience and how I got through it. These series of posts from my AutismWonderland blog will take you through our Turning 5 journey.

10/20 The Pool of Tears – I cried. A lot. I didn’t write a post about every breakdown I had. But I spent a lot of nights like this.

12/10 Turning 5 – Part 1 – The real beginning of the process. The difference between having a “typical” kid and one with special needs. The tours, the applications – all the things that needed to be done.

1/22 Autism Ain’t Cheap – Just in case you didn’t know. Especially in a city like New York, it can feel like a huge racket.

1/26 Trying to find an attorney Pro Bono – Some suggested I try to find an attorney to take my case pro bono, so much easier said than done. This is a recap of a phone call I tried to make. What’s not in the post: Even though I work for attorneys – not a single one was willing to provide any guidance. Not even my boss – whose spouse is an attorney (that works at a major law firm) and has done special ed pro bono cases in the past. I asked my boss if the spouse could provide a name of someone in NY – not to call in a favor. My boss said, “I’ll ask and let you know.” My boss never did.

2/15 Settling isn’t an option – During the process, someone told me to just settle for a public school.

4/6 The $93, 000 Question – Of course, the only school that accepted Norrin was the one completely out of our reach.

5/19  Hope is on the Horizon Program – Touring the Horizon program at P.S. 25 (The Bronx), a public school special education program for kids with autism.

6/28 Stepping Up Melting Down – After attending Norrin’s Stepping Up Ceremony – I question my decision for the millionth time.

9/10 The First Day of Kindergarten & His Teacher Said WHAT?

9/11 Doubt – This was the beginning of a very tough school year. I knew that I would have to start the search all over again.

3/21 I Cannot Lose Him – Starting the Turning 5 process and searching for a new school all over again. After touring a District 75 school – P.S. 10 – in The Bronx.

4/18 – All I Want For The Boy – Have you ever filled out a school application for a special needs child? They are often pages long and tedious to fill out. But there’s always one question that makes me pause and think about all I want for my kid.

5/8 Sometimes Things Fall Apart – By May I was already physically and emotionally exhausted. So much had happened between September and May that I couldn’t blog about. And this day was just one more thing to add to my long list of things that had gone wrong.

5/15 That One Time I Went All The Way To Brooklyn – Remember when I was all like “I’ll do whatever it takes”? I didn’t think it meant trooping it all the way to Brooklyn.

6/27 He Failed Kindergarten – Yup. My kid failed kindergarten. No, I wasn’t disappointed. I didn’t even care.

8/20 Suing the Department of Education – During Norrin’s kindergarten year, I had to file for impartial hearing twice. Once for reimbursement and once to secure private school placement.

The Turning 5 process kicked my ass! I don’t ever remember feeling so helpless and stressed out. But it was the road that led me to the most appropriate school for Norrin.

If you’re down the Turning 5 rabbit hole and you’re having trouble seeing the light – trust me when I say, you will. IT GETS BETTER! Not easier, just better. Your fight will have been worth it. Because once you get your child in the right school, life becomes a little bit better and not so stressful. HANG IN THERE!