You are here: Home / Familia / The Silver Surfer & Luke Skywalker: The Inspiration For My Son’s Name 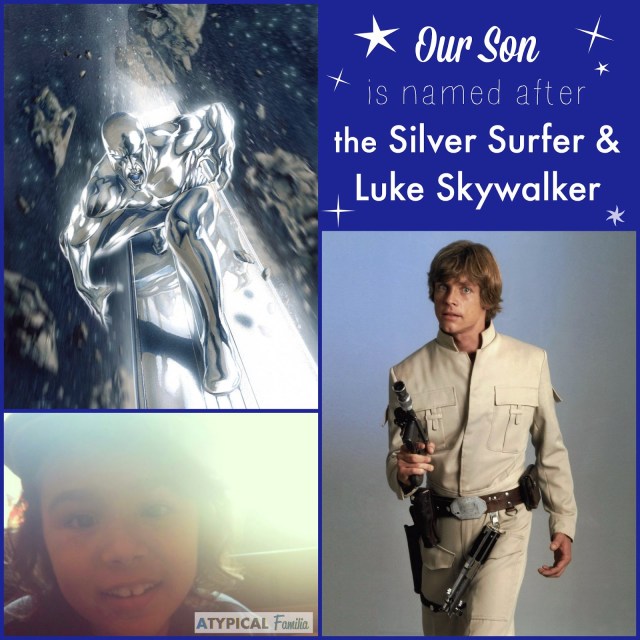 We were out on a date. Joseph and I weren’t even living together. But somewhere between dessert and the check, the subject of baby names came up.

Well, we got married. And a year later, I was pregnant. A few weeks into my pregnancy, Joseph made sure to remind me of our deal; the one that we made years before.

“Wait…you’re serious?” I asked. I really didn’t think that he’d hold me to that promise. Little did I know he had a name already picked out.

Neither one of us cared if we had a boy or a girl so long as it was healthy. But those first few months before I knew the gender, I was hoping for a girl… just so I would have some control over the name.

It was a few days before my thirtieth birthday when we went in for our sonogram to determine the sex. And when the clinician said we were having a boy, I looked over to Joseph who was smiling, his brown eyes shiny and with a clenched fist, he whispered “Yes!”

After I got dressed we took the train into Queens to see my parents. On the ride over, I tried to talk about possible boy names. But for Joseph there was only one name: Norrin Radd – the real name of the Silver Surfer. I didn’t even know who the Silver Surfer was and Joseph was trying to convince me to name my first born child after him.

The Silver Surfer, aka, Norrin Radd, is known as “one the noblest cosmic entities in the universe.” He values freedom and loves all living things. A selfless superhero, the Silver Surfer sacrificed his own life to save his beloved planet. His powers include durability, energy and speed.

When our friends and family asked what names we were thinking of – Joseph would immediately say “Norrin Radd.” No one liked it. And some had a hard time even pronouncing it.

Eventually we compromised. Joseph chose Norrin as the first name and I chose the middle name – Luke as in Skywalker.

I am a huge Star Wars fan. I remember standing on line with my parents and brother at the Jackson movie theater to see Star Wars, Empire Strikes Back and Return of the Jedi. I remember being mesmerized the entire time. It was the trilogy that defined a big part of my childhood and as I grew up, I appreciated the story more and more. And for me, Luke Skywalker was the ultimate good guy.

During one of my first conversations (via AOL instant messaging) with Joseph I asked what he was doing. He told me he was searching on eBay for a Boba Fett helmet. “You mean from Star Wars?” I typed. Joseph says that that was the moment he knew I was the one for him.

We’re heading to Disney this week for Star Wars weekends and Mark Hamill is going to be there signing autographs. It may be my one and only chance to meet the man who inspired Norrin’s middle name. Autographs can only be obtained if we get a Fast Pass and they are first come, first serve. So here’s hoping the force will be with us.

Joseph and I wanted our son’s names to mean something. We wanted him to embrace the qualities and characteristics of our childhood heroes. And so far, we believe that he has.