You are here: Home / Autism / The Encounter at Starling Meat Market 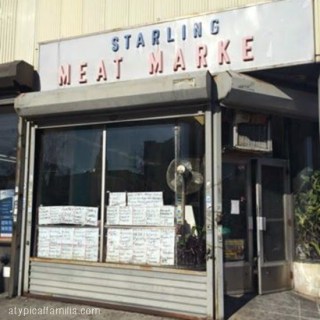 We’ve been going to the Starling Meat Market  for years. It’s one of the places in the neighborhood where we are greeted by name. And that is always a nice feeling. Because even in a large community  like ours, people still take the time to know you by name.

On Saturday afternoon as we ordered a few cuts of meat for the week an older white man walked in.

He wore khakis and a tan jacket zippered all the way up – the collar of his button down shirt peeking out. The laces on his black rubber sole shoes were neatly tied. His thin white hair was combed back. And around his wrinkled alabaster wrist was a silver bracelet with his name and two phone numbers. His name was “Timothy.”

Timothy greeted Benny the butcher like an old friend. And Benny joked backed the way he does with all his regulars. Their banter was familiar and yet somewhat off.

“How loud does the lion roar?” Timothy asked Benny. Benny responded with a roar and Timothy laughed.

“He’s big. How old is he?” Timothy asked me, looking at Norrin.

His question caught me off guard but I smiled and told him Norrin’s age.

I told him the date and within seconds Timothy told me that Norrin was born on a Friday.

He then asked about my birthday, then Joseph’s. And he told us the day we were born.Timothy then asked where we born.

And with each answer, he told us the address and nearest train station.

In between all of our questions, Timothy asked Benny how loud the lion roared.

After about ten minutes of talking, Timothy walked out without saying goodbye. I knew in our brief interaction that Timothy had some kind of special need – maybe even autism. Our meeting left me with mixed emotions. I don’t meet older people with special needs often, but when I do – it makes me think about Norrin’s future.

I don’t know what Norrin will be like when he grows up. I can only hope. I hope that he can be as independent as Timothy. I hope Norrin lives in a neighborhood that he can walk around on a Saturday afternoon and run his errands. And I hope there will be a market owner, that greets Norrin by name.