You are here: Home / Uncategorized / Public Transportation & My 7 Pet Peeves When I’m With My Kid 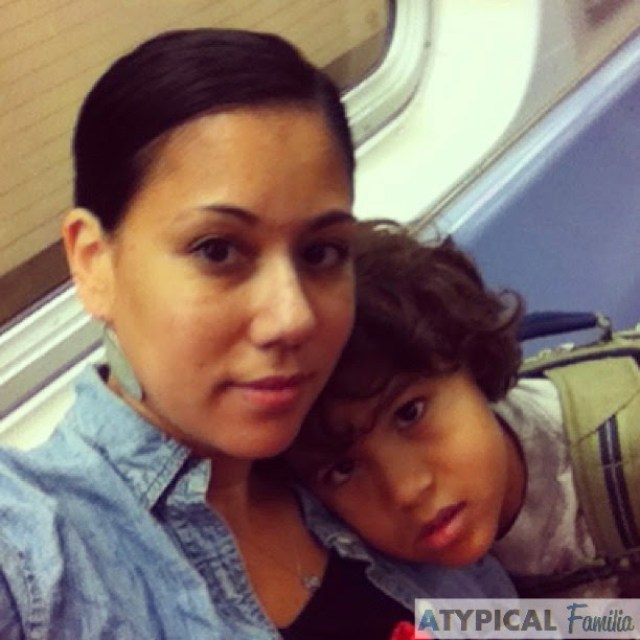 I grew up in New York City. I’ve been taking public transportation my entire life (38 years, if you must know). I take the train every day to get to and from work. One would think I’d be used to it by now. One. Would. Think. But I’m not. Because people can be real jerks. And commuting via public transportation would be easier if people would be a tad more considerate of others.

I have a lot of pet peeves when it comes to the train. Joseph says I have “Train Rage.” And when I’m with Norrin, my rage intensifies because I’m in Momma Bear mode.

I’ve been taking the train with Norrin since he was a baby. And during those early years of his autism diagnosis, commuting by train was not easy. But we worked through it. And now he’s fine. He loves it actually.
This week, I had to take the train with him. We traveled from The Bronx into Queens (to my mom), into Manhattan (met my mom in midtown and took Norrin to an appointment on 23rd Street) and then finally back home to The Bronx. Honestly, I’m used to this kind of running around with Norrin. The most frustrating part about train travel with my kid is dealing with other commuters. Because like I said, people are jerks.

Here are a few of my pet peeves that I encountered the other day while traveling with Norrin:

1. People who lean on the pole. I’m used to traveling during rush hour when the trains are crowded. I’m okay standing and so is Norrin. But if someone is leaning on an entire pole, it makes it difficult for other people to hold on.

2. Men who sit with their legs wide open. Because really? *side-eye*

3. People who insist their bags need a seat on the train.

4. People who stroll into the train – knowing there’s a crowd behind them waiting to get on the train – and then stop right at the door, blocking the masses from getting in.

5. People who don’t move out of the way  even after you say excuse me. If we make eye contact, and I’m standing and the train doors are open and I have to say excuse me a third time, I’m just pushing my way out.

6. People who push their way into the train before letting passengers off. There’s a special place for people who push little kids.

7. Women – and I say women because it’s usually women – who keep their legs crossed when the train is crowded. There was a woman who kept kicking my leg while I was standing, so I pretended not to care as Norrin stepped all over her other foot.

I have other pet peeves like people who litter or eat smelly food (my list can go on) but I’m keeping it to what annoys me most when I’m with Norrin.

But not everyone on the train is a jerk. There are some really nice people too. And they deserve a post of their own. (Next week.)

Do you take the trains with your kids? What is your train travel experience like?

Check out a few Instagram photos of our Train Travels:

« The Kratt Brothers Amazon Adventures at The Bronx Zoo {July 26 & 27}
The NEUTROGENA® Triple Repair Products That Are Making My Hair Look Fabulous! »