I am not the kind of woman who cooks every day. I am more of a special occasion cook. And it’s that time of year when I love being in the kitchen, cooking for family and friends. For Puerto Ricans a traditional Christmas meal is all about Pernil, Arroz con Gandules, Pasteles and Coquito. They are the flavors of our childhood. 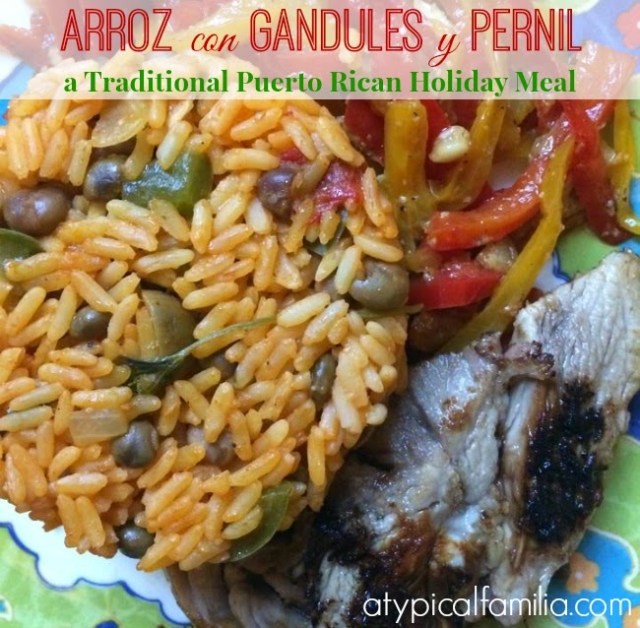 The other weekend I invited Joseph’s cousin, Julio, over for a pre-holiday meal. Julio’s a correction officer and usually works on Thanksgiving, Christmas and New Years. I thought I’d cook so we can enjoy a family meal. Julio arrived just as I was making the rice – the scent of pork, cilantro, garlic greeting him at the door. “It smells like my mother’s house,” he said. This is a HUGE compliment because (a) Julio is a momma’s boy and (b) he constantly brags about his mother’s cooking.

For our dinner I made Pernil (roast pork shouler) and Arroz con Gandules (rice with pigeon peas). Julio doesn’t eat pork so he brought over his own pasteles with shrimp. (He also brought over some Coquito – Puerto Rican egg nog).Growing up when my mother made the traditional Puerto Rican meal – she’d serve it with tostones and iceberg lettuce and tomatoes. But I served sauteed peppers with garlic and olive oil as an additional side. 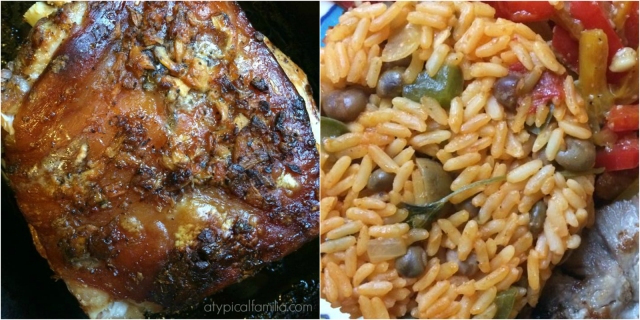 The idea of making a pernil and arroz con gandules may be overwhelming but it’s really not. Trust me. I am not a cook by any means. I didn’t grow up cooking with my mother. I mean I watched but as an adult – I pretty much taught myself how to cook. And I think I do a pretty good job. Though my mother likes to say “it’s not that you’re a good cook, you just use fancy ingredients.” (She usually says this as she’s scraping her plate and my dad asks for seconds.) “Fancy” ingredients or not,  nothing makes me happier than cooking the foods my husband grew up. And while I don’t speak Spanish, cooking these traditional meals keeps my connected to my culture.

How To Make a Pernil

Take your pilon and crush your garlic – reserve a few cloves. If you don’t have a pilon – you can just mince your garlic.

Combine crushed/minced garlic and all other ingredients in a bowl and mix together.

Rinse (sometimes I scrub it with salt while washing) and pat dry your pernil. Make small cuts into the pernil. Now if you like garlic the way I do…insert whole cloves of garlic into some of the cuts (some not all). What I love about this is that when the pernil is done, that garlic is a like a paste and just adds a little extra flavor. I told you – I really like garlic.

Place the pernil in a large bowl (or your roasting pan) and rub the mixture all over. Now this is a bit gross so use gloves (I don’t) but you have to get the marinade all up in there to create that roast piggy goodness. Once your pernil is drowning – cover and place in the fridge. You can let it marinate over night or up to 2 days.

Remove foil and bake at 375 for an hour or until skin is golden and crispy!

Note: There are so many variations on timing and temperature – depending on the size. (I check the pernil at about the 3 hour mark to see how it’s coming along.) And over years I’ve changed things up. I’ve even made pernil in an oven bag – which comes out amazing. But the skin doesn’t get crispy the way I like it. 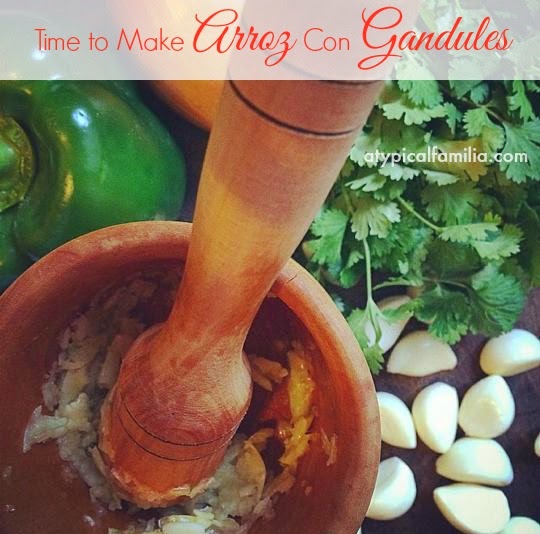 How to Make Arroz con Gandules

1 ham steak (about 7 oz.) – cubed. I usually make it with ham but since Julio was coming over – I skipped.

chicken stock – sometimes instead cooking rice with water, I use chicken stock. I especially prefer cooking with chicken stock if I’m not using ham but again because of Julio the vegetarian I used water.

I literally just follow the directions on the back of the Goya gandules can. And I follow the measurements for water/tomato sauce. I just don’t follow all the other ingredients because I like to make my rice “with a lot of stuff,” as my mother says. But my dad has said that my rice is better than my mother’s sooooo there you go.

« Holding On
Cutlery & Cookware Must-Haves for the Special Occasion Cook »