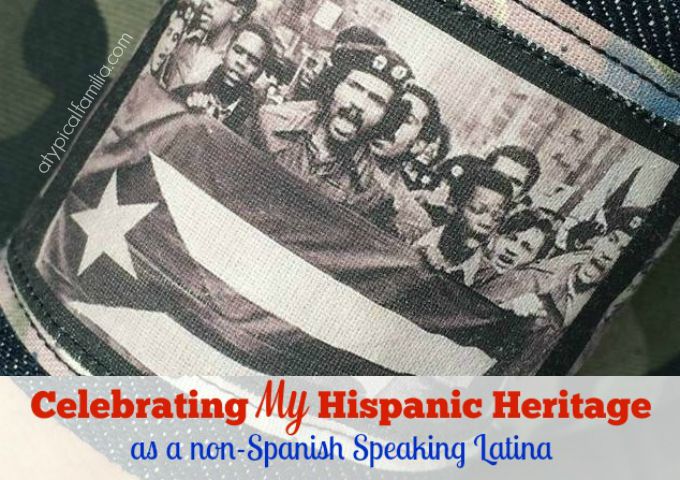 Ever since I can remember I’ve been questioned why I don’t speak Spanish and asked why I don’t care enough about my Hispanic heritage to learn. I’ve been called an embarrassment to my culture. Some friends have teased me for talking like a “white girl” while other friends say I’m not like “other Puerto Ricans.”

But whenever I travel outside of New York City (to places with a small Latino population), no one asks or cares whether or not I speak Spanish. They just see someone who doesn’t look like them. I have always felt like I’ve never had a place.

Immigration, race, nationality and what being American looks like, continue to be an issue of debate. It’s ironic that I’m questioned about being Latina enough when so many are fighting to prove they are American enough.

There are way too many misconceptions about Latinos who don't speak Spanish & I've heard them all. Click To Tweet

Recently someone asked me how I can consider myself to be a Latina blogger if I don’t speak Spanish.

I wasn’t raised speaking Spanish. I was never taught. It’s neither a long or complicated story, I’m just tired of telling it. Because telling it puts me on the defense. Can you blame me? I’ve been explaining myself for more than 3 decades.

We didn’t have a single book in our home written by a Latino author – even though my dad worked in a book factory and brought home books almost every night.

I grew up in a multicultural neighborhood. In my early years at Catholic school, not speaking Spanish was never an issue. It wasn’t until I entered high school that I realized I was not enough because most of my friends spoke Spanish.

Now as a blogger with a small cultural identity crisis, I wonder what I can add to the conversation for Hispanic Heritage Month. With a name like Lisa Quinones-Fontanez – it’s pretty tough to deny my heritage. But sometimes I even question what being Latina means.

I can’t tell you how often I’ve written something – for either a blog post or in a creative writing class – and been asked to make it “more Latina.” What does that even mean? Even in my writing, I have to prove myself. As if my own voice and experiences are not enough.Being Latina is all that I know – even if others don’t see me that way. Cultural pride goes beyond speaking a language. It’s taking the time to study its history. I wasn’t raised being taught about Puerto Rican history – I sought it out. I’m not an expert, but we can have a conversation and I’m always open to learning more.If you come to our home, you’ll see that our bookshelves are filled with Latino authors.  I have books on history, artists and other notable Latinos. Because I know it’s important to see ourselves in the books we read.

And while I can’t teach Norrin to speak Spanish, there are other ways I can teach my son to have Puerto Rican Pride. Like my blogger friend Diana I didn’t always celebrate Hispanic Heritage Month. Growing up in Jackson Heights, Queens was a melting pot of Latino American cultures. While Diana may be bilingual – I love her definition of what Latina means.

There isn’t anything about language. She associates her Latinaness to her personal values like familia and strength.I celebrate my Hispanic Heritage and being Latina every single day by being the daughter my parents raised me to be, being a good wife, mother and friend, and staying true to myself. That’s enough for me. And that’s all that matters.

The wrist cuff was made by my blogger friend Nel. Check out her Etsy store for more cool Latino inspired fashion: NelEscDesigns