You are here: Home / Uncategorized / My 11 Favorite Kinds of People To See on the Subway 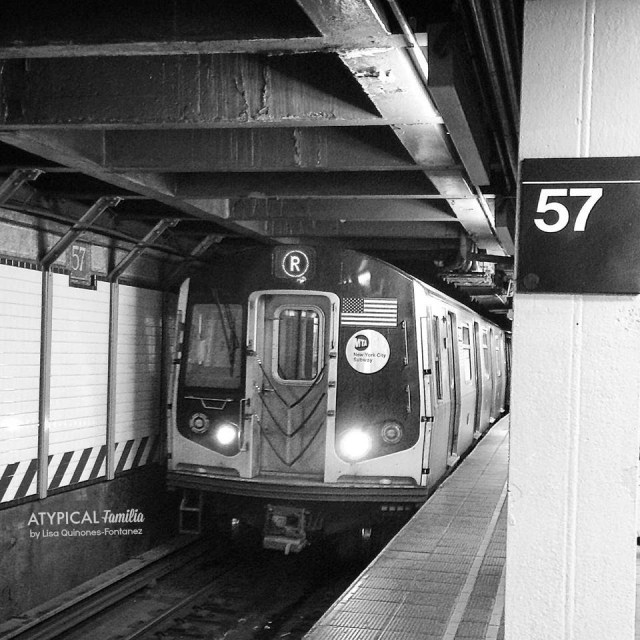 Being a native New Yorker and non-driver who relies on public transportation, I have many pet peeves when it comes to taking the subway. Especially when I’m traveling with Norrin. Taking the train can be stressful enough, the subway jerks make it harder. But people aren’t always so bad. Sometimes, I see the kinder side of New Yorkers.
11. People who smile or wave at children & say “no worries” when a kid kicks them by mistake.
10. People who give up their seat for a woman, child or elderly person. They do it immediately, they don’t bother to look around hoping someone else will do it first. Also people who give up their seat for a man with a small child or infant – because those people are rare.
9. People who offer mothers help carrying strollers up or down stairs and/or elderly women with their shopping carts.
8. People who give directions. I’m talking about the people who actually stop, take off their headphones and put down their iPhone, iPad or book. The ones who will really help by asking where they want/need to go or looking at the map to figure out the best route. I also like when other people join in and it becomes this collective effort to help someone find their way.
7. People who say “bless you” when the stranger next to them sneezes.
6. People who give money to those in need. The ones who take the time to look up and smile or nod their head -whether they give money or not. They have acknowledged a human being so many commuters ignore or look past.
5. People who perform. Let me clarify. I am not a fan of performers (I can’t with the Mariachis at 7am – #SorryNotSorry) in the morning and there aren’t many. But there is something about hearing someone sing or play an instrument in such a public space. I envy that. I get nervous speaking in front of an audience. I couldn’t imagine standing on the subway and performing.
4. People who sing/dance. Not the performers. Just the folks who are listening to their iPods and are really feeling the music. These people fascinate me. They have a comfort in their own skin that I admire.
3. People who are reading the same exact book I’m reading on the subway or people who are reading something I’ve read. If I’m standing next to someone reading what I’m reading – I have to be the corny person to say “good book.” And if I see someone reading a book I have read and loved, sometimes I have to stop myself from talking to them…
2. Women (because it’s almost always women) who meet and bond. There is something special about watching two strangers have an intimate conversation on the subway. They usually start talking during a train delay or after witnessing something strange or upsetting – and instantly start talking about their lives.
It’s amazing how much we are so willing to share with a stranger and comforting to realize our commonalities. It’s sweet to hear strangers laugh like old friends, bid each other goodbye or “take care,” sweeter when they touch hands or a shoulder and say, “It was so nice talking to you.” In a city as crowded and crazy as New York – to make a genuine connection with the stranger sitting next to you on the subway is pretty special.
1. Old friends meeting after many years. I am a sucker for reunions and nothing makes me happier than witnessing chance encounters. I like hearing them catch up – “Do you remember _____?” and “OMG remember that time when…” I like when they exchange numbers and make plans to meet again. And I like watching them as they say goodbye, the person on the train, smiling to themselves for the next few stops. It makes me happy.
One of my favorite things to do on the subway is listen to other people. I like to study their movements and facial expressions. You may call me nosy, but I prefer observant. My first short story I wrote and submitted in my very first college writing class was inspired by someone else’s subway conversation.

I will be the first to admit that the subway can be scary – it’s smelly, dark, dirty. But sometimes it can feel like this magical world and I feel lucky to be a part of it.

Who do you love to see on the subway?
Sharing is caring...

« Who Should You Write For? #MondayMotivation
7 Things to Love about Disney’s Art of Animation Resort at Walt Disney World »