You are here: Home / The Personal / Will A Child With Autism Know To “Look For The Helpers”

When I see the Mister Rogers meme “Look for the helpers,” I can’t help but think of my son with autism and other kids like him. 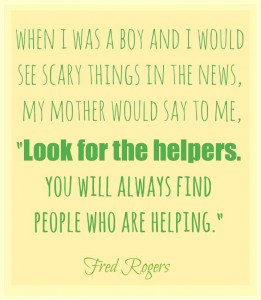 “What’s wrong, Mommy?” My 7-year-old son Norrin asked, putting his finger to the tear falling down my cheek.

We were sitting on the sofa last night and I was watching the news. Crying as an 8-year-old girl was talking about her classmate Martin Richard – the youngest victim of the Boston Marathon bombing.

Before I could answer, Norrin pointed to the television and said, “It’s a sad movie.”

I pulled Norrin closer to give him a hug and kiss. “Yes, baby. It’s a sad movie.”

These are the moments I am grateful for autism. Norrin is blissfully unaware of the horrific act of violence committed on April 15. The world – his world, anyway – is still a peaceful place. Norrin’s innocence is preserved another day.

It was only a few weeks ago, we were standing in a crowd of runners, waiting for Norrin to run his first race. I was nervous then – thinking of what would happen if Norrin slipped out of my reach.

And when I see that Mister Rogers meme “Look for the helpers” shared and liked all over my Facebook feed, I can’t help but think of Norrin and other kids like him.

We live in New York City. My husband is training for the New York Marathon. I cannot keep Norrin sheltered. We are constantly in crowds, taking public transportation, living our day-to-day lives. We do not and will not live in fear.

But what would happen to Norrin if he was caught in the middle of such violence? Norrin may not understand what’s going on around him. Norrin has no sense of danger. He may not be able to tell someone his name, to say that he’s lost and needs help.

As a mother, my heart aches for the Richard family, and for the men and women of Boston. But I am in awe of the humanity and compassion that reveals itself during such a tragedy. I am inspired by their resilience to keep running.

Norrin may not know to look for the helpers in a moment of panic. But I have to have hope and have faith that the helpers will look for Norrin.

« HEALTHY ESSENTIALS® Products Have You Covered for Earth Day | #Moms4JNJConsumer
Life, Animated: A Story of Sidekicks, Heroes, and Autism by Ron Suskind »