You are here: Home / Autism / Life, Animated: A Conversation with Ron Suskind

A paperback version of the Disney Publishing Worldwide book Life, Animated: A Story of Sidekicks, Heroes, and Autism by Pulitzer Prize-winning author, Ron Suskind will be available on July 12th, 2016. A film based on the book is now playing in theaters.

From Academy Award® winning director Roger Ross Williams comes the story of Owen Suskind, a young man who couldn’t speak as a child until he discovered a unique way to communicate by immersing himself in the world of Disney animated films.

Note: My Q & A with Ron Suskind was originally published on Parents.com/ToTheMax on April 16, 2014. I wanted to share it here again because I am beyond excited to see this film. You can check out the official trailer below. 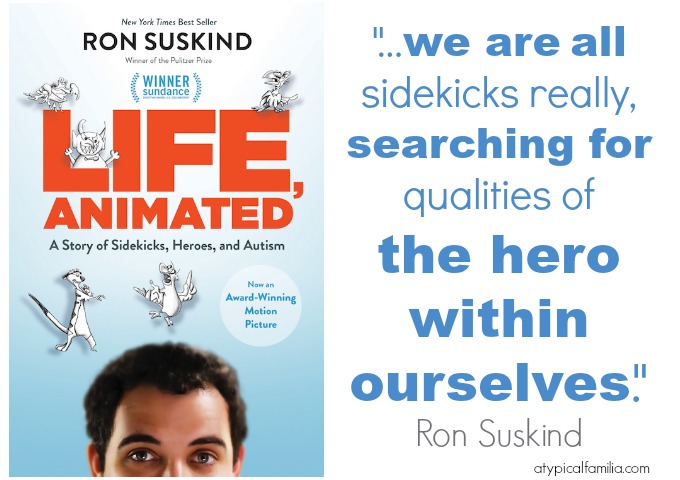 It’s not every day I have the opportunity to chat one-on-one with a Pulitzer Prize winning journalist. But Ron Suskind, author of Life, Animated, immediately put me at ease. We both shared a common connection – raising an autistic child. Twenty years ago, Ron and Cornelia Suskind’s son, Owen, was diagnosed with autism.

Life, Animated chronicles the Suskind family journey and “powerfully reveals: how, in darkness, we literally need stories to survive.”

Q & A with Ron Suskind, author of Life, Animated

LQF: Life, Animated is so different from your first five books. When did you make the decision to share your story? And what was it like to write about something so personal?

RS: I lived a pretty public life over the last 25 years, as a national affairs writer for the Wall Street Journal and the books…Life, Animated is my 6th book. With so much going on publicly, it was important to keep some core of privacy. It’s easy to write about pretty tough stuff when it’s not about you. So it was a tough decision and had a bit of a funny revolution.

I started my first book, The Hope of the Unseen (started as a series in the WSJ that won the Pulitzer Prize for feature writing), a month after Owen was diagnosed. As I went into this blighted urban school in the worst part of Washington and saw a whole building full of kids who were very much left behind…I looked at them differently having someone who was already so dramatically left behind living in the bedroom. I saw the way people stared at my son. In the other books that followed that first book, I was in Afghanistan and Pakistan, wrestling with presidents. And it became clear to me, at some point, that I had been writing about people left behind all over the world and the most dramatically left behind person, was in many ways Owen…who had no place at the table.

We lived in a planet of story and journalism. And friends – who were also journalists – would ask if we would write about Owen…[they said] it could be a great thing for people with autism, you’ve learned things that could be of value to others. But we mostly stayed out of that, we had our hands full.  When Owen was around 19, he really started to attain a self-awareness that we thought he would never get to. He was saying in various ways, that he was a special person and wanted people to know who he was. That started a conversation (around four years ago). It got to the point, where Cornelia and I, looked at each other and said: Can we turn the hot light of investigative reporting – what we’ve done our whole life – on ourselves? It was an emotional inquiry and a very tough decision. Basically Cornelia posed the question, “Could a book like the one we would write, could that have been of value 15 years ago when we were so lost, to us?” And of course, that was a yes.

LQF: Denial – especially in the early stages of autism, is a natural response for many parents. You share something that a family friend tells you – “Respect denial. It’s there for a reason: a way to cope with what we cannot face.” At what point do you think you and Cornelia were ready to face autism?

RS: I don’t think Cornelia and I separated there. We both tiptoed along mostly side by side. We felt immediately the weight (in 1993/94) of the word autism and what that word seemed to indicate. As Owen starts to grow through the middle years of 5, 6 t0 11 – [we realize autism, PDD-NOS and Asperger’s] it’s just a label game. I think it was a gradual process of giving up these notions or expectations and how those expectations distill  themselves into hope for a certain set of outcomes. As we started to give those things up a bit, the labels became less important and the natural issues of denial faded. And it happens within a few years.

LQF: How have your hopes and dreams evolved for Owen?

RS: In a way that’s fascinating. You make life with what’s in front of you…Owen has stitched together a life. We try to appreciate – as Owen does – what’s in front of him and a lot of the expectations [that we used to have] we just don’t carry them around anymore. Owen is autistic and will be autistic the rest of his life. He still has many, many challenges. But we want Owen to live fully, to feel his life fully. And to have choices. That’s the big thing – to have as many choices as possible. We want Owen to be able to live an intentional life on terms that he needs to live it on. To be supported so that he can try things, that he hopes for things, that he can reach for things. Owen is now sufficiently self-directed and has built enough capabilities that you feel that happening. It happens in the pages of the book.

LQF: What are your favorite Disney movies?

RS: The four favorites are the ones that have been the most useful to use, The Big Four: Beauty and the Beast, Aladdin, The Lion King and The Little Mermaid. They were central to Owen’s emergence.

LQF: I know Life, Animated will resonate with many autism parents. What do you hope people outside the autism community will take away from reading your book?

RS: We had many nominations for possible titles and the one Cornelia liked was, I Want So Much More Than They’ve Got Planned – the last line of the ‘I Wish’ song from Beauty and the Beast. I sang that with a group of autistic kids at the United Nations [on Autism Awareness Day]. If we can manage to allow [individuals with autism] with all their self-directed energies to discover so much more than we’ve got planned, then they will be better off and more importantly we will be better off.

Life, Animated will resonate with autism parents as well as people outside the autism community. Click To Tweet

LQF: Owen sees himself as “the leader of the sidekicks” and you dedicate the book to your older son Walt, “a real life hero”  – would Owen agree?

RS: Oh yeah. When Owen built the sidekicks philosophy, he started applying sidekick characters to us. So for birthdays or whatever he would make you card and draw a sidekick. I was often Merlin or Rafiki. Cornelia was often Big Mama – the wise owl from The Fox and The Hound. But the only one Owen drew as a hero was Walter – Aladdin, Eric or Simba. [Cornelia and I] realized that the dynamic of Owen and Walter’s relationship was arguably the most important in either of their lives.

It’s interesting because now Owen has come to realize that we are all sidekicks really, searching for qualities of the hero within ourselves.

Since publication, their site lifeanimated.net was created to keep readers informed about the book and to create a place for a community of people who want to connect and share the affinities of their children. Readers are invited to contribute to the Autism Artists Project, by uploading an image or link to a video of art made by an autistic artist.

« Our Kia Ride and Drive Experience
It’s time to SPEAK UP. Silence is no longer an option. »