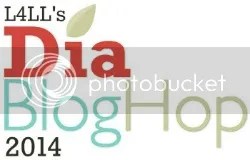 I am so proud to host Lulu Delacre for the 2nd Annual Latinas for Latino Literature (L4LL) Dia Blog Hop in honor of Día de los Niños, Día de los Libros which is celebrated annually on April 30th. Established in the United States by poet and author Pat Mora, Día is a celebration of books and children. The 2nd annual L4LL blog hop has 24 authors/illustrators paired with 24 Latina bloggers. Click HERE to see the complete schedule.
Mamá Maestra
Elisa was the first one to arrive. She had come ten miles from Burtonsville, catching two buses and walking four blocks on a drizzly winter morning to arrive in time to sign her participation contract and become a mamá maestra. Elisa’s family is from El Salvador, but she was born in the USA. The young high school dropout is six months pregnant and determined to become the mamá her baby deserves. As soon as she learned about the Mamá Maestra project, she decided to join.
Mamá Maestra is an initiative created and housed at CentroNía, a bilingual charter school and learning community in the District of Columbia. The project’s goal is to instill literacy behaviors in Spanish-speaking, low-income expectant or new mamás, so that these behaviors become second nature to them. Mamá Maestra helps them improve their children’s early literacy and school readiness. There is a clear consensus among researchers, as pointed out by the U.S. Department of Health and Human Services, that a gap exists between poor and wealthy children when it comes to school readiness—a gap Mamá Maestra is working to lessen.
I became involved with this initiative in the fall of 2013. As social and print media criticized the lack of Latino representation in children’s books, I itched to do something more than create books that are both mirrors for Latino children and windows for non-Latino kids. Books that represent Latino children are wonderful, but only if they are read. What if there were a way to help foster literacy among low-income Latino children years before they start school? When the opportunity to consult with the Mamá Maestra brainstorming team at CentroNía arose, I was thrilled to donate my time, knowledge, and books.
Designed as a series of Spanish-language workshops, the project draws from the wealth of Latino culture to focus on the themes of Folklore, First Teacher, Wellness, and Literacy. I led the first Mamá Maestra workshop on folklore; we talked so much that we went over time. The mamás shared the nursery songs they remember hearing in their childhood and were assigned to ask older Latinas about the lullabies they knew. As we joined in a song from the book, Arrorró mi niño: Latino Lullabies and Gentle Games, Elisa smiled and announced, “The baby is kicking!” which prompted the mamá across the table to declare, “He likes the songs!” 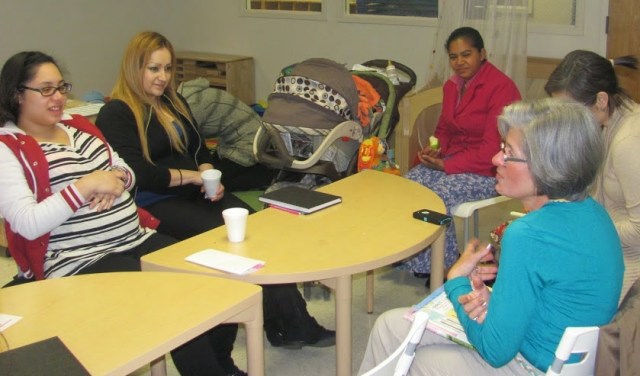 How do mothers singing songs and talking improve early literacy? A recent Economist article on child development sheds light on the need to talk directly to young children in order to build the vocabulary they will need to perform well later in school. The New York Times followed that article with one describing how in Rhode Island some Latino toddlers wear tiny recorders during the day, so that researchers can measure the amount of words spoken to them. At Mamá Maestra the instructors encourage singing and talking to your child, playing with your child, and reading to your child in the language spoken at home: español. And, whenever possible, the project highlights children’s books authored by Latinos in order to instill pride in what Latinos can accomplish.
To end the workshop, we all rose from our seats and joined hands in a big circle as we recited the project’s mantra: “Mamá Maestra: canta, cuenta, juega y ¡lee!” I left that first workshop convinced that, one mamá and baby at a time, we can bring the joys of literacy to the next generation of Latinos.
***
Lulu Delacre is an award-winning bilingual children’s book author and illustrator, currently working on Olinguito y su ABC: Discovering the Cloud Forest through the Spanish Alphabet.
Visit her at www.luludelacre.com
Sharing is caring...