You are here: Home / Uncategorized / I’m Going To Miami for Hispanicize Thanks to #3Mpact {#Hispz15}
Last November I wrote about the Bronx Mom – Lizette Hernandez – who inspired me. I love what she has done for the autism community. By starting the Bronxchester Challenger League, she has made a difference for so many Bronx families. I nominated her for a #3Mpact Award because I love sharing her story and for the chance to win a fully sponsored trip to the Hispanicize conference. It was a win-win for us both because I knew if I won a sponsorship and she was nominated, we’d be heading to Miami together. 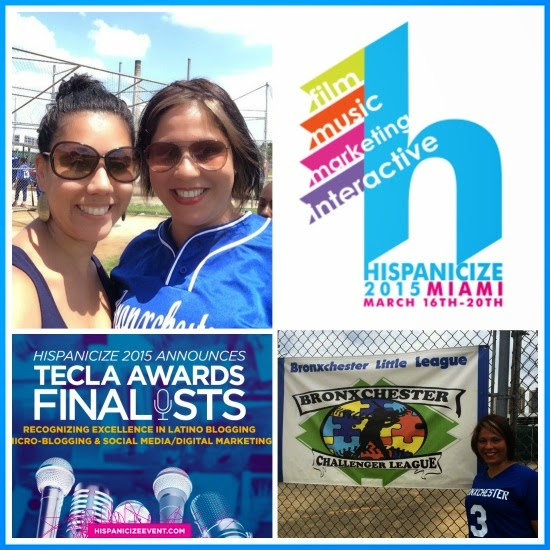 While Lizette is not one of the #3Mpact finalists, I did win a full-sponsored trip to Hispanicize. I’m bummed Lisette isn’t able to come with me but I will continue to spread her message and her work while I’m there!
Three years ago, I attended Hispancize for the first time. I hadn’t been blogging for very long. I didn’t own an iPhone, iPad or a Mac. I didn’t quite understand Twitter or SEO. I’m pretty sure I hadn’t heard about Instagram. Hispanicize was my very first conference and I was speaker. And I didn’t know a single blogger in real life.
The below is a portion of my 2012 Hispanicize recap that I wrote for AutismWonderland —
It was overwhelming those first few hours. A whirlwind of fabulous Latino bloggers, journalists, philanthropists, film makers, writers, celebrities, media folks – all jam packed into one place. I don’t think I’ve ever been in a room with so many influential Latinos. It was truly inspiring.

And then there was me? And I thought to myself, “I have no business being here.”

I’m not a professional. I don’t get paid for writing this. It’s just something I do, because I like to write. It’s a distraction for many things. And since I don’t have the time or the energy to focus on writing fiction – this blog, keeps me writing.

Sure there were bloggers that I had established an on line relationship but I can be painfully shy. I’m not the kind of person to walk up to a stranger and say “Hi! My name is…blah blah blah.” No matter how many comments we’ve exchanged on line. And I could quite easily hold up a wall.

So when I started to mingle and introduce myself, I was hesitant. Assuming that no one in that room had ever even heard of me and my little blog.

Obviously, it’s a great big blogosphere, so there were people who did not know me. But they were interested in talking to me.

Then there were the ones who knew of me. Like Angelica, Bren, Eva and Aurelia – who greeted me with open arms, telling me how happy they were to meet me. And in my head I’m all like, “Seriously? Me?”

And then I met a mom blogger who cried when she met me. We hugged and cried for a good ten minutes. Then I met another mom blogger who said “Had it not been for your blog, I would have never known what to look for.” I don’t even have the words to say how moved I was by these two women and listening to them speak about their children. And there were a few more mom bloggers who had children on the spectrum, who I connected with.

Even after all this, I still had that feeling of not belonging.

And then on the second day, after lunch a few us were sitting around chatting with Piera aka Jolly Mom. We had attended her session earlier in the day and were picking her brain. I expressed some of my insecurity. And she said five words I’ll never forget: You have to own it.

I knew she was right. I don’t own what I do. Don’t get me wrong, I believe in what I’m writing. And I believe that my writing is good. But I am too quick to dismiss it. I am too quick to think that I don’t have a place within the blogosphere. And I’ve been suppressed for so long in other aspects of my life, I find it hard to believe that my voice matters.
It’s hard to believe I wrote that 3 years ago. So much in my life has changed and much of it is still the same. While I’ve gotten a little better at networking and putting myself out there, I still don’t always own what I do. What can I say? I am a work in progress.
If you’ve been reading me for a while or we know each other in real life, you know that I am a legal administrative assistant. And this week has been one of my worst work weeks ever. A week where I have been made to feel extremely undervalued, unappreciated and insignificant. One of those weeks where I’m questioned whether to stay or go because I am just that fed up. But I can’t quit (for so many reasons). Not right now.
A few weeks ago, I received an email congraluating me on being a finalist for a Tecla Award. The winners will be announced on Monday night at Hispanicize. I’m one of the 3 Latina finalists in the Best Latino Parenting blogger category. I will admit when I read the email, my first reaction was, “YAY!” and my second was, “I probably won’t win.”
And if I don’t win, I’ll be okay. Being a finalist is a enough for me. It says that my voice in social matters. I feel appreciated and valued. So no matter what happens, I am going to own it and I am going to celebrate it.
Don’t get me wrong, I’d still love to win…so cross your fingers for me okay 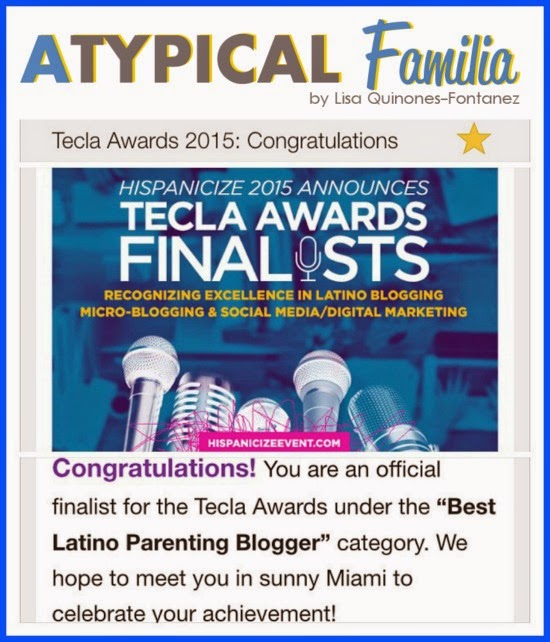