You are here: Home / Entertainment / How To Experience Hamilton

Are you as obsessed with Hamilton as I am? 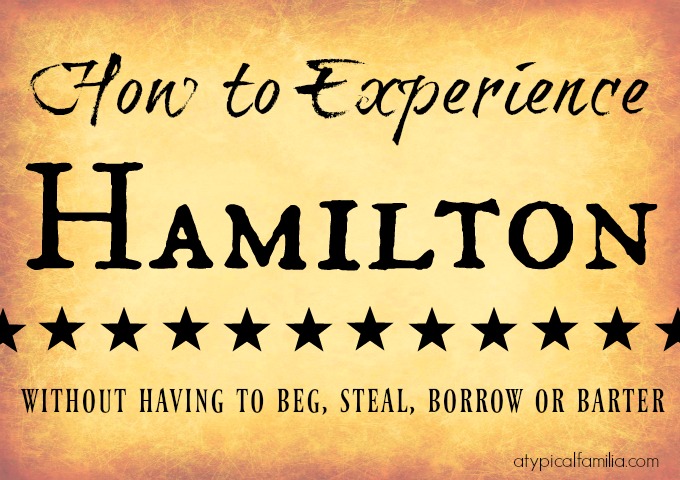 I’m a born and raised die-hard New Yorker. I’m Puerto Rican. I love musicals, hip-hop and history. (Fun fact about me: I minored in History as an undergrad with a specific focus on NYC & The Bronx.) The moment I heard about “Hamilton An American Musical” by Lin-Manuel Miranda, I knew that it was something I wanted to see on Broadway.

I am still kicking myself for not buying tickets when I had the chance to last year. I had a ticket (just one because Joseph wasn’t that interested in seeing it with me) in my cart. And with the minutes counting down, I remember thinking to myself that $300 was too much to pay for a ticket. If I knew then, what I know now…

Even though I haven’t seen Hamilton, that doesn’t mean I can’t have the experience – especially living in New York City.

Enter the Lottery. Almost every day, I enter the Hamilton Lottery and almost every day I get that email encouraging me to try again. Heartbreak is definitely part of the experience. But I hear people really do win so…don’t throw away your shot. 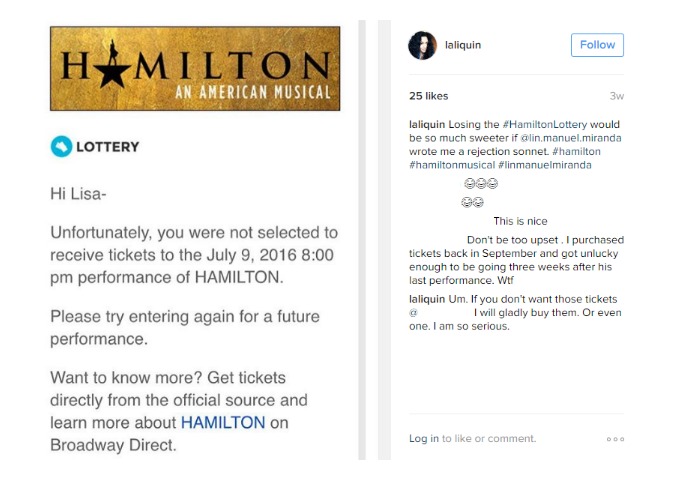 Listen to the Hamilton soundtrack*. This may seem like a no-brainer. But I tried to hold out listening to the music – I was truly saving myself for the Broadway experience. Let’s be for real, as much as we all want to see Hamilton, we will probably have to wait for the movie. I finally gave in and downloaded the soundtrack and I’ve been listening to the Hamilton soundtrack non-stop. Don’t listen to it on shuffle, listen to it straight through. It’ll take a while but it’s totally worth it.

Read “Hamilton: The Revolution” book*. After you listen to the entire Hamilton soundtrack, buy the book. DO NOT download the book on your Kindle, buy the actual book. The day after I heard the entire soundtrack, I ran out and bought the book. Then I went home, listened to the entire soundtrack again while reading through the book. “Hamilton: the Revolution” is a beautiful book filled with “..more than 200 funny, revealing footnotes for [Lin-Manuel Miranda’s] award-winning libretto…”

Their account features photos by the renowned Frank Ockenfels and veteran Broadway photographer, Joan Marcus; exclusive looks at notebooks and emails; interviews with Questlove, Stephen Sond­heim, leading political commentators, and more than 50 people involved with the production; and multiple appearances by Presi­dent Obama himself.

Read Ron Chernow’s Alexander Hamilton*. This is the book that inspired Lin-Manuel Miranda to write Hamilton. I haven’t read it myself but it’s on my Kindle. If Lin-Manuel can read it while on the beach, I can certainly read it on the 6 train.

Visit Fraunces Tavern. Fraunces Tavern is not just a restaurant and bar, it’s also a museum. You can visit the museum, go for brunch or do both! It’s not only NYC’s oldest and most historic Tavern it’s also a setting in Hamilton. When Aaron Burr offers Hamilton a drink they walk into Fraunces Tavern where Laurens, Lafayette and Mulligan are already gathered. I walked by the other evening and had to stop in front of it. Fraunces Tavern has a fascinating history and I can’t wait to visit. 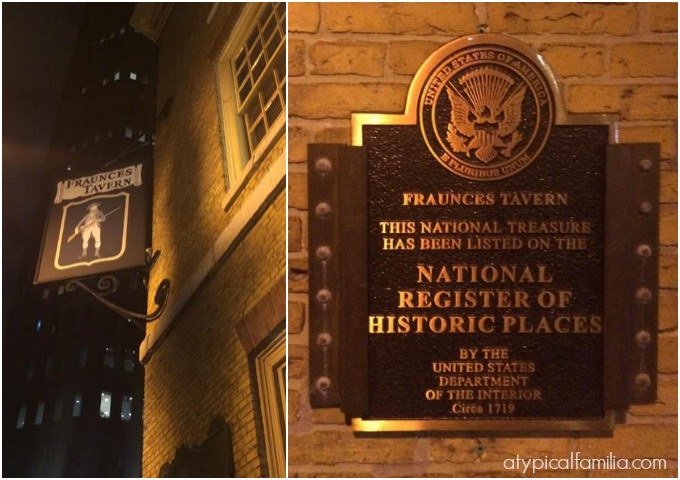 Visit Hamilton Grange National Memorial. It’s Quiet Uptown is one of my favorite songs, it is heartbreakingly beautiful. Take a walk through Hamilton’s Harlem home, located within Saint Nicholas Park.

Hamilton Grange National Memorial is open year-round and is located in Manhattan’s Hamilton Heights Historic District. Admission to the site is free, and open Wednesday through Sunday. Visitors are welcome to view our exhibit galleries containing historical information about Alexander Hamilton.

Watch HBO’s John Adams. John Adams is one of my favorite mini-series on HBO. It’s raw and really brings the Revolution to life. Yeah, yeah, yeah I know – it’s not a biopic about Hamilton but he is featured in two episodes. While John Adams isn’t physically in the musical, he is still a significant character within the story and in our country’s history.

Stalk the cast on social media. And when I say, “stalk,” I mean this is in a totally normal and not creepy way. I follow the cast on Facebook, Instagram, Twitter and Youtube. I especially love following Hamilton on Snapchat – it’s a cool way to get a real-time behind the scenes view.

#Ham4Ham. Not only has “Hamilton An American Musical” embraced social media, they’ve embraced their fans. And #Ham4Ham is the show before the show. However, this is not for me. As much as I’d love to see them, I don’t think I could ever wait in the crowd. But hey – if that’s your thing? Go for it! I’ll watch it on Youtube.

Youtube. Hamilton has really embraced social media and puts so much out there for their fans to enjoy. I love watching Hamilton on Youtube. I’ve even created a playlist featuring some of my favorite clips.

But listening to RuPaul: What’s The Tee? with Michelle Visage brought me to tears the other day.  I’ve been a Michelle Visage fan since Seduction. Listening to Michelle talk about her daughter’s depression and what it meant for them to see Hamilton, was just so incredibly moving. And it was something that I could definitely relate to but that’s for another post.

While there are several podcasts dedicated to Hamilton, my favorite is Hamilton the Podcast with Brittani and Khalehla. I made the mistake of starting with the last episode. If you love the soundtrack as much as I do, start with the first. Brittani and Khalehla discuss Hamilton song by song, and like me – they haven’t seen Hamilton either! They are fun, smart and quirky.

Give Back. One of the things I admire about Alexander Hamilton was his determination to “rise up.” At the end when the Hamilton cast sings Who Lives, Who Dies, Who Tells Your Story – Eliza sings about the orphanage she established, the first private orphanage in New York City. The Grand Windham Organization is still around today and continues to help children and families.

So Hamilfans, tell me, did I miss anything? Would love to hear how you experience Hamilton!

« It’s time to SPEAK UP. Silence is no longer an option.
Tips & Tricks to Make Mornings Manageable »