You are here: Home / Marriage / How Our Love Story Began 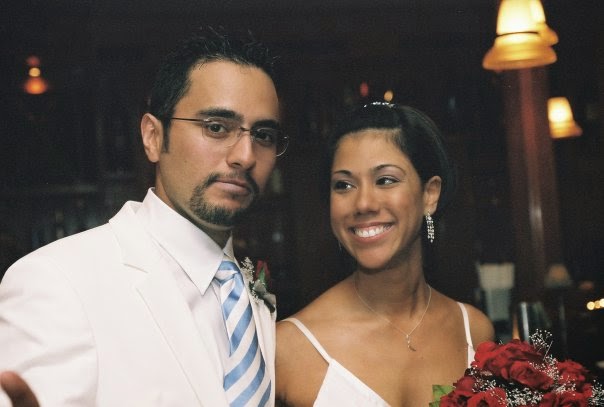 We met by chance. I was a receptionist. Joseph, a Fed Ex courier. Fourteen years ago, he delivered a package. He’s “been delivering one ever since.” Joseph loves to add that line.

What made it a chance encounter?

It wasn’t his regular route.

I had quit that job, started a new one, only to return two weeks after I quit. I met Joseph one week after I returned.

I had just moved 10 minutes away from where he lived.

Three years after our chance encounter. Joseph and I jet set off on our first vacation: Dominica – the “nature” island.

To get to Dominica, we had to board a small propeller plane in Puerto Rico. Now, I hate flying in general. But propeller planes? Scare. The. Crap. Out. Of. Me!

And what was supposed to be a 30 minute plane ride, turned into 3 hours of flying around in tropical storms and turbulence. The whole time I squeezed Joseph’s hand and he reassured me. Looking out the window, all I could see was fog. No land. No water. And all I kept thinking about was Joseph and I plummeting to our demise. (Did I mention, we watched Cast Away the week before our trip?)

We circled the airport a few times, the pilot attempted several landings but the turbulence was the worst I’ve ever experienced.

At one point, I turned to Joseph and declared my undying love. I may have even started to cry. (I’m a tad dramatic and do not do well under pressure.)

And then we started at talking about something else and I think he said something about us getting married while we were in Dominica. I mean, it’s all very foggy (no pun intended) – after all, I seriously thought the plane was going to crash into the ocean. Come to think of it, maybe that’s why I got the proposal…

After a few more attempts to land on Dominica, the pilot flew back to Puerto Rico for the night. The next day, we landed safely in Dominica.

That evening Joseph and I talked to the event planner at the hotel and by the end of our stay (6 days later), we were married. No fuss, no muss – just us.

One year after we were married on Dominica, we had a reception to celebrate with our family and friends.

Three years after we were married, Norrin was born. And that was unplanned too.

Some things are better that way.

This was originally posted on AutismWonderland as Love Accidentally (11/15/2011).