You are here: Home / Christmas / Hispanic Barbie: A Barbie Doll Just For Me {Christmas Gifts I’ll Always Remember}
I was five year old when I received my very first Barbie. It was a “My First Barbie” doll; she had long blond hair and blue eyes. She wore a yellow and turquoise body suit. And she came with a pair of matching yellow pants, a turquoise skirt and yellow mules. And while the Barbie is from 1980 – it’s an outfit that’s still relevant today (I would totally rock it). I loved her. 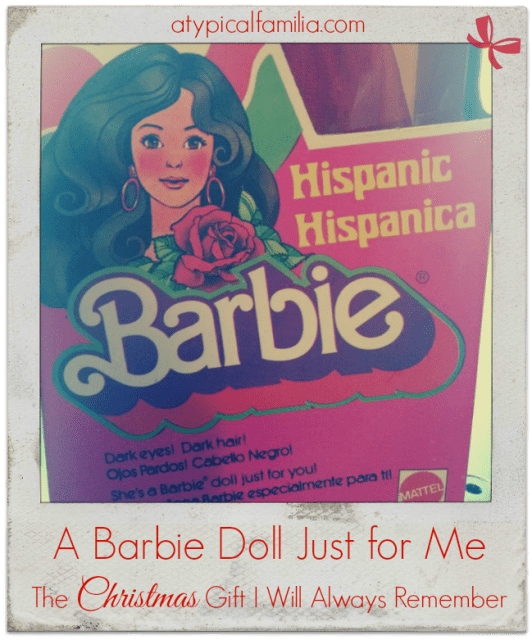 But I will never forget the day I saw Hispanic Barbie. It was a few weeks before Christmas and I was maybe 7 or 8 years old. I was shopping with my mother on Main Street. She had dark skin, brown eyes and long black hair. I loved everything about her. From her peasant blouse to her red skirt with black and gold trim to her red hoop earrings. (She looked like the woman on the soaps my mother kept her in dresser drawers. You know those soaps I’m talking about – they were wrapped in red tissue paper and smelled like musky perfume. I can’t remember the name.)

Hispanic Barbie didn’t really look like me or like any woman in my family but there was something familiar about her. And it was the first doll that I had ever seen that that was Hispanic. Up until that point – dolls were either white or black.

I told my mother I wanted her for Christmas. My mother kind of laughed. She picked it up, turning the box over and around – probably looking for the price. “We’ll see,” she said. My mother never said no or yes – she always said, “we’ll see.”

On Christmas morning my cousin Millie and her husband Andrew came over. She handed me the gift Santa had mistakenly left at her apartment. The tag said “from Santa” but even at a young age I recognized my cousin’s large and loopy hand writing. When I ripped open the package, it was the Barbie I had wanted.

I knew it was my mom’s doing. I knew she must have told Millie what I wanted. That was the thing about my mom. We didn’t have much money. I didn’t get spoiled with Christmas gifts. My mother always bought us the things that we needed but she always made sure we had one thing that we wanted. My mother created Christmas magic in her own way. 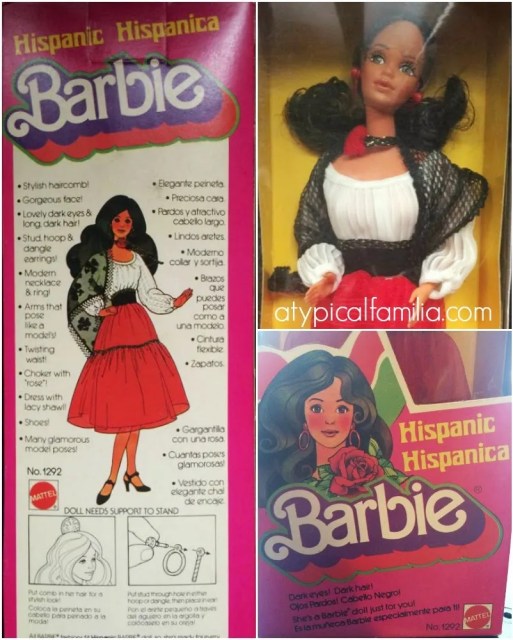 I played with that Barbie all day. And over the years my Barbie collection grew but there was only one Hispanic Barbie. I changed their clothing often and created stories for each one. As became older, I cut their hair and used red pen to darken their lips, blue or purple for eyeshadow. When I grew too big for Barbie I tossed them all out.

I had forgotten all about my Barbie collection.

Until I met Joseph. He introduced me to eBay and I was hooked. On eBay anything could be found and bought. He was a collector of toys and my love of Barbie returned. I started buying Barbie dolls again – keeping them in the box, obviously. As I started collected Barbie’s, I thought of the Barbie that looked like me. I searched for her on eBay until I found her. I won’t tell you how much I paid. It was before Norrin and I was much more carefree when it came to money.

When she arrived in the mail, all the memories of my childhood Christmas came back to me.

I may have never wanted to be a mother, but I held on to my dolls hoping to pass them along to my daughter. When I got pregnant and found out I was having a boy, I packed up my dolls and put them away. They remain in their unopened boxes buried in my closet (today I rummaged through boxes until I found her). But every holiday, I get sentimental and think about that Christmas when Santa gave me my first Hispanic Barbie.