You are here: Home / Autism / The Thing About Birthdays When Your Kid Has Autism

Birthdays over the years… 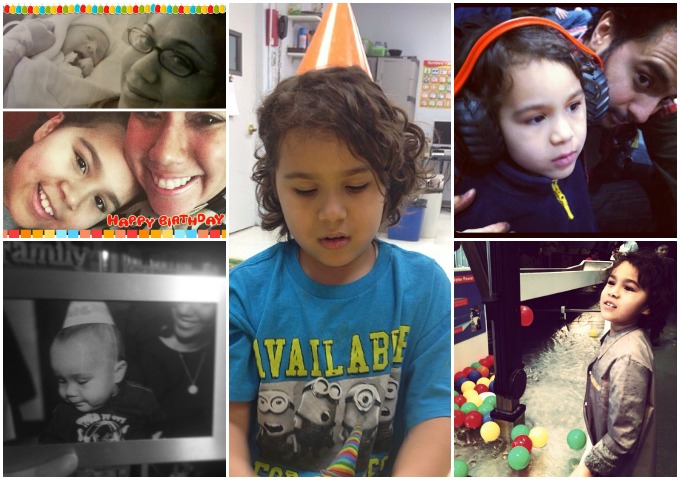 I remember when Norrin turned one. I know a lot of parents throw a big party. But it didn’t make sense to me because – what one year knows it’s their birthday? So we went to my parents house and cut a cake.

We told ourselves: when Norrin turns five, we’ll throw a big party. Of course, that was before Norrin was diagnosed with autism.

I was concerned about Norrin before he turned two but was advised to wait. On his second birthday, we stayed home and cut a cake with friends. And the next day, when Norrin still wasn’t talking or clapping or pointing, I made a call to schedule our first evaluation with a developmental pediatrician.

By the time Norrin turned three, he had an autism diagnosis and was in the full swing of early intervention services. And that was the year, we decided to throw a party. We invited friends, family and the neighbors to our small two-bedroom apartment. I ordered pizza and an elaborate Disney Cars cake. I made goody bags for the kids.

His 3rd birthday was the first time I realized how difficult socialization was for Norrin.

Watching the other kids playing together and seeing Norrin play by himself was tough. Every so often, he’d come out of the room to have some time away from the kids. After a few hours we sang Happy Birthday, helped Norrin blow out his candles and cut the cake. I decided that we weren’t throwing another party.

Since then we’ve celebrated Norrin’s birthday quietly. Going to his school with cupcakes, juice boxes and goody bags. And then we’ll do something special – just us.

His 6th birthday we went to the Monster Jam Truck Show. And on his 7th birthday, we spent the day in Connecticut – at an aquarium and a children’s museum – places he loves. Then we went for Chinese – Norrin’s favorite. And he was happy.

I think my husband and I would love to throw a big birthday bash. With balloons and music, surrounded by friends and family. But right now, that’s not what Norrin wants. That’s not what he cares about. Norrin’s happy with a few gifts and cake – even if it’s just the three of us singing Happy Birthday.

But when he turned 9, he asked for a birthday party “with all the friends.” Granted, his friends were the little girls from “Despicable Me.” It was the first year, he requested a party. It was progress. So for his 10th birthday, Norrin will finally have a birthday party.

How do you celebrate birthdays?