You are here: Home / Uncategorized / Hey T.I. – It’s Not Cool To Make Fun of Kids With Special Needs Who Ride The “Short Bus” 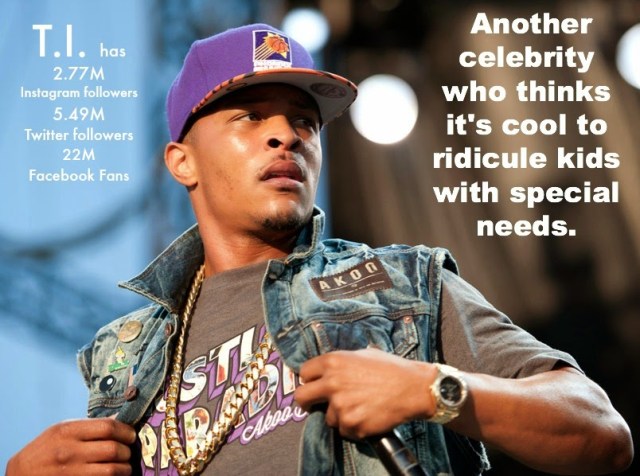 The other day a friend shared a video that rapper T.I. posted on his Instagram account. He used the hashtag: “ShortBusSuperStupidRetardation.” The hashtag made me cringe. And I was like, really? Because the hashtag diminishes individuals with special needs and because T.I. has a huge following.
Someone with that kind of following has the power to create a trend. A person with that kind of following will be retweeted and liked and shared thousands of times over. Whatever they tweet will most likely get replied to, retweeted and/or favorited over and over again. That tweet will be hashtagged and shared on Facebook and Instagram. It will be shared with their followers, their followers followers and so on. When a celebrity uses the r-word to insult someone or something – it goes way beyond their social media reach.
When a person with that kind of following uses a hashtag ridiculing kids with special needs – it lets their entire community know: it’s okay to make fun of and bully those who are different.
It’s not okay. It wasn’t okay when 50 Cent or D.L. Hughley did it.  It wasn’t cool when Ann Coulter did it. It wasn’t cool when Drake and J.Cole did it.  And it’s not okay when Latino writers do it. There should be no place for that word or that hashtag on social media.
My kid is 8 years old and has autism. He also rides the “short bus.” He’s been on it since he was 2. I put him on that bus to a special needs preschool before he could speak and while he was still in diapers. Putting him on that bus, while he was so young and so vulnerable, was one of the toughest things I had to do as a parent.
Over the years, I’ve seen my son flourish and I am amazed by his progress. I am in awe of everything he knows and how much he has taught me. My kid may ride the “short bus” but he is far from stupid.
Yeah, yeah, yeah…T.I. wasn’t talking about my kid. But he might as well have because in that one hashtag – T.I. insulted an entire community. A community I am part of. He insulted my kid and every other kid like him.
It’s not about being oversensitive or playing word police. It’s about dignity and respect. When people use the r-word (as an insult to a person, place or thing) it perpetuates this idea that individuals with special needs are dumb, worthless and ugly. It is not an acceptable word to use.
In the Black and Latino community autism and other special needs are still stigmatized. They are often misunderstood and unrecongized. Children in our communities are often diagnosed much later and miss out on the critical early intervention services. Our communities often lack the resources and schools. There are a handful of Black and Latino celebrities (mostly women) advocating for individuals with special needs. When a prominent celebrity (it’s usually a man), that has such influence over so many minorities, chooses to ridicule individuals with special needs – hurts us even more.
So the IG fan who wrote “y’all know damn well he didn’t mean no harm to anyone with special needs if you were apart of this culture you would know exactly what he meant” – is wrong as well. That comment is bullshit. Sorry, there isn’t any nice way I could say it.
I grew up with hip hop (we still listen to it), I am a woman of color and I live in The Bronx. In many ways I am a part of “hip hop culture.” And that’s not an excuse to insult an entire community. We shouldn’t have to accept ignorance as part of the culture. If T.I. didn’t mean to insult individuals with special needs then he shouldn’t have used them as the punch line to his lame joke. Because that mentality, that hashtag, that humor is the thing that weakens our community. 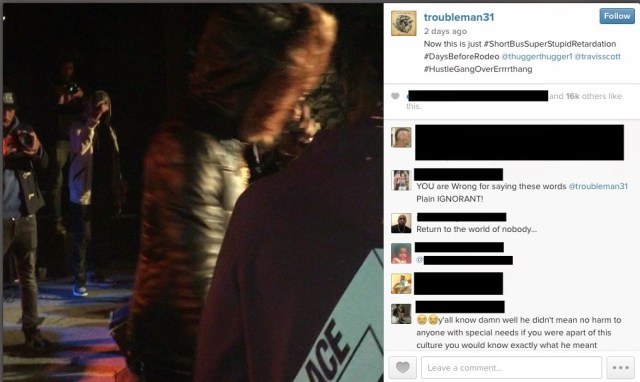 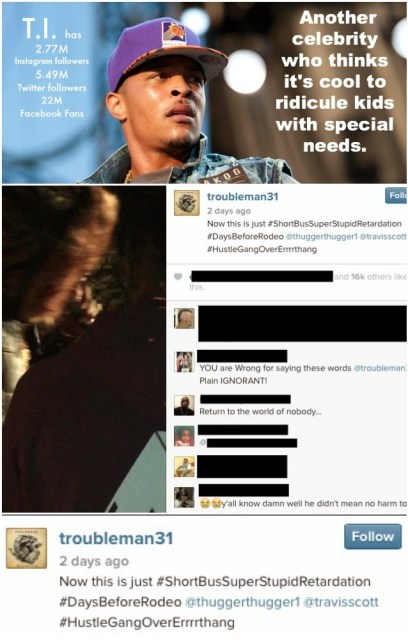 « It’s The Most Delicious Time of the Year with Marcus Samuelsson @Macys @CulinaryCouncil {#spon}
My Ouidad Haircut: The Stages of a Good Hair Day (in GIFs) »