I am a member of the Wildlife Conservation Society’s Zoo Crew & received membership for my participation.

This summer, the Bronx Zoo is strapping on their superhero capes, saluting Zoo Keepers and rocking out with Dan Zanes and other fabulous family performers.

Now that school’s out, kids have plenty of free time to check out all that the Bronx Zoo has to offer – including the newly renovated Children’s Zoo! 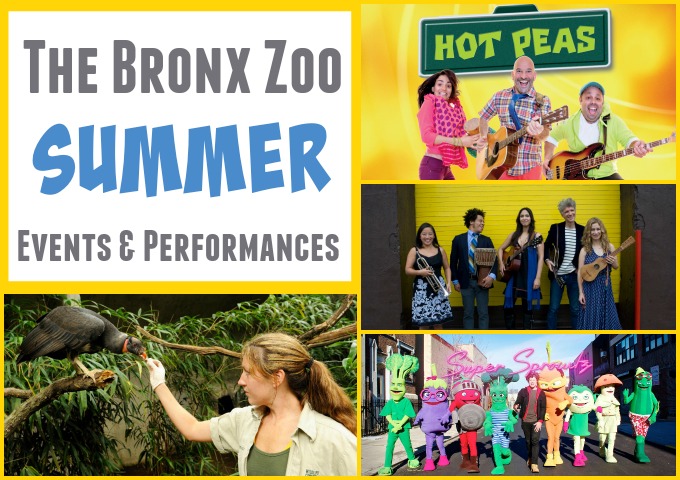 As the need to protect and preserve wildlife and their vanishing habitats continues to increase, the animal care professional’s role as educators and conservation ambassadors has become essential. Zoo and aquarium professionals care for hundreds of species, including mammals, birds, reptiles, amphibians, fish, and invertebrates. A keeper’s day includes an array of tasks like cleaning, food preparation and feed out, medical treatment, training, enrichment, landscaping, exhibit design, animal introductions, public outreach and education, and much MUCH more. Don’t miss the variety of keeper chats and special animal enrichment taking place during this special week.

Join Grammy Award winner Dan Zanes and Friends at the Bronx Zoo for an outdoor, fun-filled dance-party, hootenanny for the 21st century! Called the “crown prince of contemporary kid’s music,” by People Magazine,  don’t miss his uncompromising vocal and instrumental artistry and muscular pop beat.  Zane’s globe-trotting music ranges from elements of Tunisian Sufi, the Louisiana bayou, Appalachia, the Caribbean and South Africa to making a CD completely in Spanish. He likes to call what he does “21st-century, all-ages, handmade social music,” Since his debut album, “Rocket Ship Beach,” in 2000, Zanes has recorded with top musicians, including Debbie Harry, Sheryl Crow, Natalie Merchant, Lou Reed, Ziggy Marley and Philip Glass.

Grammy-winning artist and longtime bassist for They Might Be Giants, Danny Weinkauf is the man behind the wildly successful TMBG mega-hit “I am a Paleontologist.”  He’s just released his first solo album for kids, No School Today on TMBG’s own label, Idlywild Recordings.  The “shimmery, shiny pop” tunes include catchy gems about marsupials, archaeology, voting rights, and even a song about Ben Folds!  New hit “Champion of the Spelling Bee” reached #1 on Sirius XM’s Kids Place Live and was featured in the Scripps National Spelling Bee. 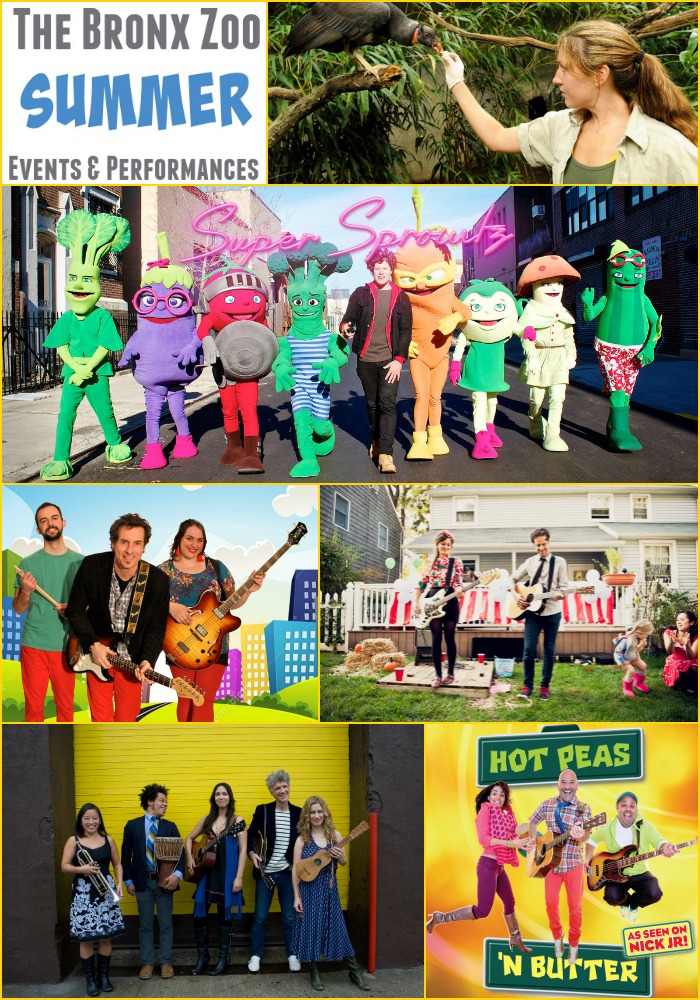 Here’s a look at what else is going in this July and August at the Bronx Zoo:

Children of all ages will love watching Roger and the Super Sprowtz lead the audience through a high-energy super hero training camp featuring 4 levels of songs, dancing and games. Children will be led through an action-packed curriculum of health and wellness broken down into four easy-to-remember stages: Mind, Heart, Body, and Tummy! Their catchy music will have kids yelling “I want more broccoli!”, and their built-in games will teach the super-heroes in training which super powers come from which veggies! It’s all about learning to stay healthy and making smart choices.

Husband and wife duo Greg Attonito (The Bouncing Souls) and singer/songwriter Shanti Wintergate are the heart of the kindie music group Play Date. The goal of their music is to inspire children to use their imaginations — and their dance moves — to explore the world around them. Play Date’s aptly-named album Imagination won Creative Child’s 2014 Seal of Excellence Award. Called a “breath of fresh air” (swingwhistlezing.com), they’ll be bringing their guitars and infectious energy with popular songs “Dance Like a Monster,” “Anyone Can Sing,” and more! Play Date’s song “XYZ” was recently featured in a Nordstrom’s Back to School video called “The A to Z Life.”

Explore nature and the sights and sounds of New York City’s Great Outdoors and the fun recreational activities visitors can participate in. Join Park Rangers and become a bird detective and even do some bird-watching. Learn how to pitch a tent, make a campfire and paddle on a real kayak. Then, experience what it was like to immigrant to our New York shores coming across the sea to Ellis Island. Times: 11-4:00. Location: Dancing Crane Pavilion.

A Go “off the grid” with family rock act Jason Didner and the Jungle Gym Jam as we celebrate the joy and energy of being outdoors among nature and give electronic gadgets a little break. With a Jersey rock vibe like Bruce Springsteen, they’ll sing about wonders in nature like ladybugs, sea lions, the beach and the moon. They’ll also take a very funny look at the wildest exhibit at the zoo– the people who visit!

Craft: Make Nature Inspired Hanging Mobiles: This July, inspired by nature, the artist Alexander Calder and animals throughout the newly renovated Children’s Zoo, young artists will create their own unique  hanging mobile using a variety of materials like paper, popsicle sticks, beads, as well as natural materials like sticks, pinecones, and leaves. Participants will be encouraged to include representations of their favorite animals from the newly opened children’s zoo in their nature-inspired mobile!

Re-Usable the Musical. In this one-of-a-kind puppet show, a young girl named Kazumi takes a musical journey to learn about protecting our animals in the wild with actions we take at home. This show teaches kids how to protect the planet using the five Rs: Refuse, Reuse, Reduce, Recycle, and a very special and important R: Remember.

How To Make Your Garden Grow. Come to our recycled garden and experience a pollinator garden, digging garden and vegetable garden. Every day there are games, activities and crafts to help your kids learn more about the importance of sustainable gardening and healthy eating for humans and wildlife.

For more information on exciting events taking place at the zoo and be sure to check bronxzoo.com/events.