You are here: Home / Broadway Plays / Bright Star Musical: The Power of the Untold Story

Disclosure: I was provided with media tickets to see Bright Star. As always all opinions are my own.

I’m a gal who loves a good Broadway musical. I’ve been going to the theatre ever since I can remember. But I don’t go as often as I’d like. Our date nights are few and far between and Joseph isn’t really into musicals. Planning a girls night out can be tough too. So lately I’ve been going to Wednesday matinees. And when offered 2 tickets to see Bright Star – the new musical from Grammy® winners Steve Martin and Edie Brickell – I said yes! 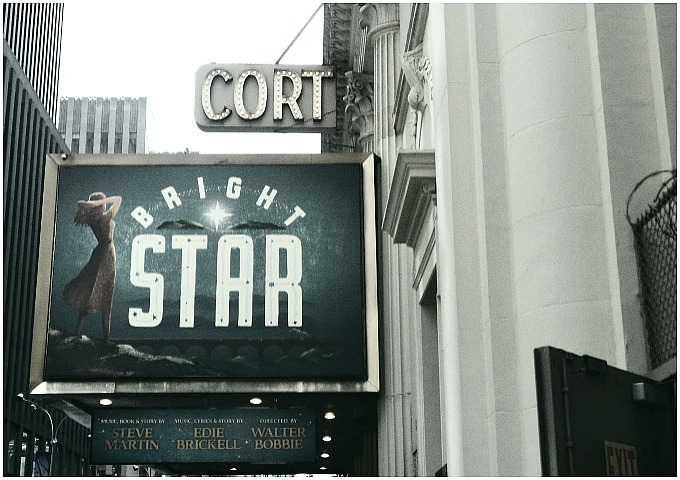 I hadn’t heard of Bright Star prior to the invite but I was curious. Because when I think, Steve Martin, I think The Jerk, Saturday Night Live and Parenthood not Broadway musical.

Even after reading a little about it, I still didn’t know what to expect. And I wasn’t 100% convinced it was going to be for me. But I went with an open mind because I love Broadway musicals. And I’m sucker for a good story.

BRIGHT STAR, a new musical about the stories we tell… and the ones we don’t.

Directed by Tony® winner Walter Bobbie and inspired by a real event, this “unabashedly romantic” (The New York Times) original musical tells a sweeping tale of love and redemption set against the rich backdrop of the American South in the 1920s and ‘40s. When literary editor Alice Murphy meets a young soldier just home from World War II, he awakens her longing for the child she once lost. Haunted by their unique connection, Alice sets out on a journey to understand her past — and what she finds has the power to transform both of their lives.

It took me a few songs to get into Bright Star. But by the time Carmen Cusack (who plays Alice Murphy) sang “Way Back in the Day” I was hooked. Seeing Cusack literally transform from this no-nonsense literary editor to a feisty young girl within seconds was flawless.

And as the curtain closed at the end of Act One – I was speechless. I’m pretty sure the entire audience was stunned too. Usually I look forward to intermission but I couldn’t wait for Act Two to see how the story would unfold.

What I love about the theatre – especially musicals – is the storytelling. And Bright Star is a powerful story that takes you on an emotional journey.

At times, Bright Star borders on hokey but it’s forgivable. In many ways it reminded me of the old Broadway musicals I saw as a kid. There were moments I laughed out loud and moments that broke my heart. Typically, I’m not a fan of the banjo or Blue Grass music, but I found myself tapping my toes to the beat.

I identified with the characters of Bright Star in more ways than I expected. As a writer, I loved Billy Cane’s (played by A.J. Shively) persistence in becoming a published author. As a mother, I admired Alice Murphy’s unbreakable spirit and her ability to forgive. And like so many of the characters, I know what it’s like to live with longing and regret.

What I appreciated most about Bright Story is Alice’s untold story and the importance of it being told.

We all have an untold story, one that shapes the direction our life – for better, for worse or a little of both. We carry these stories, whether they weigh us down or move us forward. When we allow ourselves to tell our stories, we allow ourselves to let go of the past, to forgive ourselves and others. In telling our stories, the future becomes a little bit brighter. It’s liberating. I saw that for the characters in Bright Star.

And this writer left the Cort Theatre inspired to continue writing her untold story. But don’t expect it to be accompanied by Blue Grass music.

For more information on Bright Star or to buy tickets visit:   http://brightstarmusical.com/.