You are here: Home / #AutismAwarenessMonth / Seeing The Autism Signs For the First Time

Looking back, all the autism signs were there. I just didn’t know what what to look for.

The year was 2007. Norrin was about sixteen months old when I first suspected something was “wrong.”

I remember telling my mother I was concerned that Norrin wasn’t speaking. My mother waved my concerns away, saying I was just a new mom who read too many books. Joseph felt the same way and told me not to worry. Everyone else told me that Norrin was just fine. 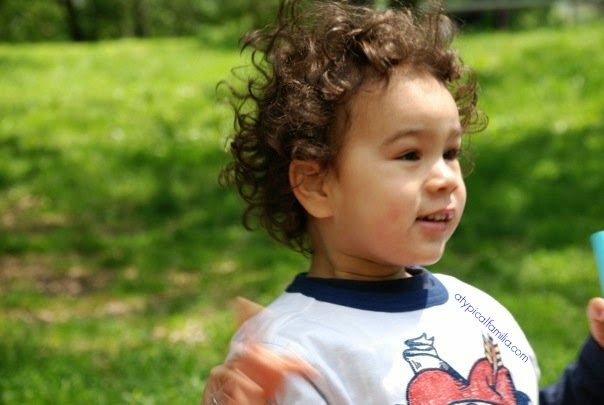 At eighteen months we took Norrin for his visit with the pediatrician. I expressed my concerns to the doctor. “Boys typically develop slower than girls…if he’s not talking by the time he turns two, then call this number,” our pediatrician said and then scribbled down a number on a scrap of paper.

I wish I could say I ran home and dialed that number.

But I didn’t. I waited. I waited until January 21, 2008 – the day after Norrin’s 2nd birthday. And Norrin’s first appointment with the developmental pediatrician was scheduled six weeks later.

It was during my six week waiting period that I started learning about autism.

The first book I actually read was Jenny McCarthy’s Louder Than Words. I may not agree with Jenny now, but her book helped me recognize the autism signs in Norrin. There is a part where McCarthy asks her son to bring her something (can’t remember what). She writes that she spent a few hours asking him over and over again to bring her the item to her. She said that she closed the door and refused to let him leave until he fulfilled her request.

After I read that part, I conducted my own little test. I asked Norrin to bring me his bottle of milk. And it was like I didn’t even exist. He didn’t look at me, he didn’t bring me his bottle. He just went about doing his own thing. To help him understand, I walked over to him, put the bottle in hand and said, “bottle of milk.” I walked him over to the door while he held the bottle in his hand. Then I took the bottle away and placed it back on the shelf where it was and stood at the door. I held out my hand and made the request again “Norrin, bring me the bottle of milk.” I repeated the request several times. He’d come to me and tried to walk out of the room but I blocked his path. He started crying, I started crying, but I kept making the request. I was determined for him to bring me that darn bottle. Eventually, he did. It took almost an hour. And when he did, I started crying some more. I hugged and kissed him and made a big fuss over it.

As proud as I was, that was the moment I knew.

From that point on, I prepared myself for Norrin to be diagnosed. Norrin had all the autism signs. I flipped through his baby milestone calendar – you know the cutesy kind with the stickers to track baby’s firsts. I realized most of the stickers were still in their original place. I wasn’t too busy to mark the milestones, those milestones had never been met. In addition to not speaking, Norrin never pointed, clapped or waved. He didn’t play peek-a-boo either. Norrin was also a “hand flapper.” All along I thought Norrin was pretending to conduct music like the kids on The Little Einsteins cartoon.

Related: Got Questions About Autism

The day finally came when we met with the developmental pediatrician. After two hours of questions and observations, he recommended further evaluation. We met with a social worker, a speech pathologist, a psychologist and had Norrin’s hearing checked.

The evaluation process wasn’t easy. It hurt to see all the things my child could not do. It hurt to feel like I had done something wrong by waiting.

And after two months of evaluations, the developmental pediatrician confirmed what I had suspected all along.

Related: The Day My Son Was Diagnosed with Autism

Norrin was diagnosed with autism and global developmental delay in May of 2008 and was recommended for Early Intervention services. At 2 years and 3 months old Norrin had the cognitive level of a 14-month-old and the language level of a 7-month-old.

By the time Early Intervention services started it was almost the end of June. Eight whole months after I first expressed concern to Norrin’s pediatrician. Eight months wasted.

I blamed myself for a long time after Norrin was diagnosed. I felt like I had failed my child.

But even though I waited, we were lucky that there was still time. Early Intervention services are for children 0 to 3 years old. And I was determined to make the most of the time Norrin had left. Once Norrin got the services he needed and once I knew how Norrin needed to be taught, that guilt eventually subsided.

By September, Norrin had three words and could say a few letters. He was taught to point his finger and clap his hands. He could also sign a few requests. And he laughed when we played peek-a-boo. He was making progress.

It felt amazing watching Norrin thrive. And I cherished and celebrated every single first, the way any new mom would. I may have cherished them even more because I knew how hard Norrin worked to meet the milestones that came so easily for other kids.

Since Norrin’s initial diagnosis, I’ve received calls and emails from friends who were concerned about their child’s development. I’m not a doctor but my advice is always the same:

If you have any doubt your child may have autism, don’t wait.

Do not let anyone – not your mother, your husband or your doctor – dismiss your concerns. Trust your maternal instincts. Take your child to see a developmental pediatrician as soon as you suspect something may be “wrong.” Do not wait until your child turns two.

This article was originally published (and written by me) on Parents.com/To The Max. It has been slightly updated/revised for Atypical Familia.