You are here: Home / Uncategorized / An Afternoon on Governors Island 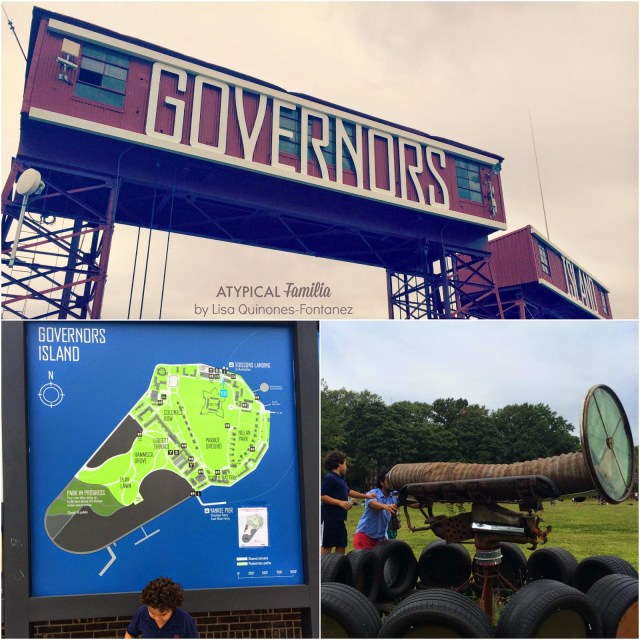 The last days of summer are scarce and the weather’s been unpredictable. With nothing planned for the day, we decided to just get in the car and drive. I suggested we drive to the Seaport and just walk around. We were lucky enough to find parking right away. And that’s when Joseph suggested we take the Ferry to Governors Island. We’ve never been. It wasn’t one of the things on our summer bucket list but it was something to do.
The Ferry was only $2 per adult (round trip) – kids under 12 years old are free. It was a super quick ride – probably no more than 10 minutes. We were unprepared for the afternoon as we saw people with bikes, baseballs and picnic  baskets. So we just walked around – which was cool too. It was like being a completely different city or in a movie. We walked in and out of historic homes built at the end of the 19th century. We explored Fort Jay. Norrin had a little freedom to run and really stretch his legs. We saw a view of Manhattan I’ve never seen before and an amazing view of the Freedom Tower.

Governors Island, a 172 acre island in the heart of New York Harbor, is only 800 yards from Lower Manhattan, and even closer to Brooklyn. It is a world unto itself, unique and full of promise.

For almost two centuries, Governors Island was a military base – home to the US Army and later the Coast Guard, and closed to the public. In 2003 the federal government sold 150 acres of Island to the people of New York, with the Island’s governance and funding jointly shared by the City of New York and State of New York. The remaining 22 acres of the Island was declared the Governors Island National Monument that is overseen by the National Park Service.

We will definitely return to Governors Island and be prepared next time. Check out some of our photos from the day…