You are here: Home / Our Autism / Autism and Standardized Testing: Is My Kid Ready 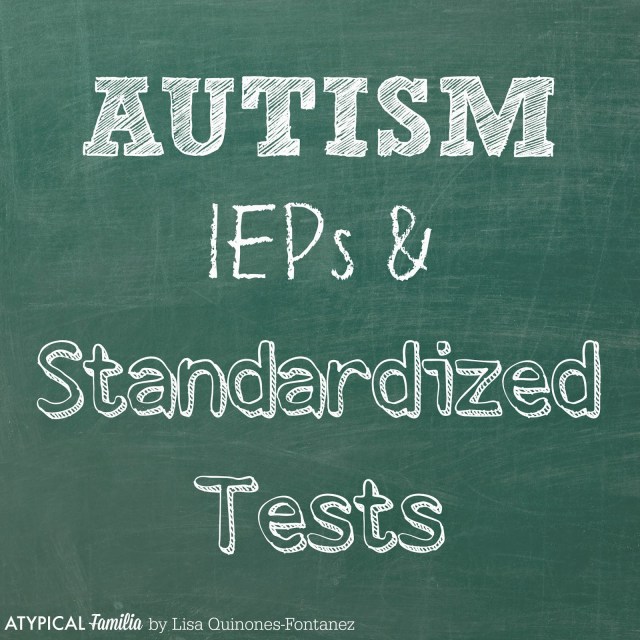 It’s IEP time. There was a time when I’d be stressed out and up all night before an IEP meeting. I am (finally!) at a point where I no longer freak out. But a few weeks ago I was thrown a curve ball when going over Norrin’s goals for next year. I was asked about standardized tests.

Norrin is 8 years old. If he were a typical kid, he’d be going into the 3rd grade in the fall. And 3rd grade is when standardized testing begins. However, Norrin isn’t a typical kid. He’s in an ungraded school and in a class with 6 kids, 1 teacher and 2 assistants. The kids are between the ages of 6 and 8.

Two years ago when Norrin was in Kindergarten at a public school, his teacher and the assistant principal made it very clear that they wanted Norrin out. Norrin failed every single subject. And the teacher and assistant principal said that Norrin needed to be in a District 75 school because he would never be able to handle taking standardized tests.

Nothing hurt more than seeing Norrin work so hard during that kindergarten year and watching him “fail.” And that first morning when I put him on that bus, to his specialized ungraded school was the day that I let go of mainstream dreams. And part of those “dreams” were the standardized tests. I let myself believe they were something Norrin couldn’t ever do. (Feeling pretty crappy about that…but that’s for another post.)

I had to sue the DOE to get Norrin out of that public school and into his current school. Norrin is in a good place, surrounded by teachers that get him. And Norrin’s teachers believe that with the proper accommodations, he could take the standardized tests next year. His teachers believe that the NYS Alternative Assessment would not benefit Norrin or show his true capability.

I know Norrin is a bright kid. But I am fully aware of his challenges. As sharp as Norrin is, he has some severe cognitive disabilities. He is easily distracted, extremely self-directed, struggles with socialization, language and number understanding.

But almost every evaluation is the same when it comes to Norrin’s IQ – it’s inconclusive. Two years ago, one of his evaluations concluded:

Full scale IQ was in the extremely low range, however due to significant variability in performance this cannot be considered a valid representation of overall cognitive functioning.

Do your kids take the Standardized Tests? What kind of accommodations do they have?

http://www.p12.nysed.gov/assessment/nysaa/ — Office of State Assessment: The NYSAA is a datafolio-style assessment in which students with severe cognitive disabilities demonstrate their performance toward achieving the New York State P-12 Common Core Learning Standards in English language arts and mathematics.

http://www.engageny.org/resource/new-york-state-common-core-sample-questions  — On this page you will find links to access a representative sample of questions used on the 2013 state test. There are questions available in every grade (3-8) for both ELA and Mathematics. These questions have been annotated to display the kinds of thinking students are required to do in the new Common Core Tests. These documents will be helpful for better understanding the requirements and expectations of the Common Core state tests.

http://www.p12.nysed.gov/specialed/publications/policy/testaccess/guidance.htm  — These federal laws and regulations apply to all school districts, Boards of Cooperative Educational Services (BOCES), State-operated schools, State-supported schools, approved private schools, charter schools, colleges/universities, agencies, corporations, and others either because they receive federal financial assistance (pursuant to Section 504) or are public or private entities (pursuant to ADA). These laws require that qualified individuals with disabilities be provided the opportunity to participate in all programs and services, curricular and extracurricular, which are available to nondisabled individuals, including test programs and examinations.

« Autism Awareness Fashion by Nelesc Designs
We Went to Chuck E. Cheese for the 1st Time Ever! And It was a learning experience for us. »