You are here: Home / Uncategorized / Alone at the Playground 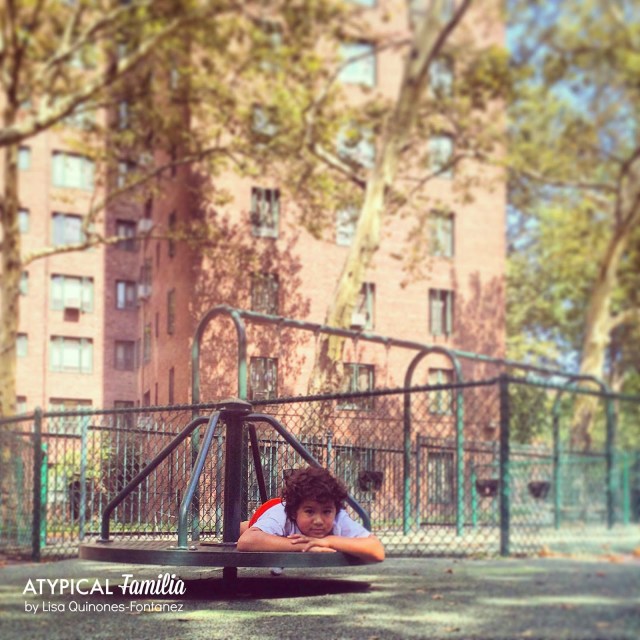 It was the last week of summer vacation. And I took a few days off from work to spend with Norrin. With Joseph at work, Norrin and I stayed local. We had been avoiding the playground for weeks but with most of the neighborhood kids back in school, I knew Norrin could have the run of the place.
As a kid I loved going to the park, meeting up with friends and making new ones. Making friends and playing came easily to me. For my kid? Not so much.
Too many children overwhelm him. He doesn’t have the social or play skills and language like typical boys his age. He’s getting too big to play with the younger kids. And most times, he isn’t interested in playing with the neighborhood kids.
So we avoid crowded playgrounds. It’s too much for him. And if I’m going to be honest…it’s too much for me.
A crowded playground means I have to hover and keep a close eye. I have to prompt Norrin to be mindful of the smaller children. I have to ignore the bigger kids – and some adults – who stare when Norrin starts flapping his hands or talking to himself. And I have to hear kids say, “Oh he’s back again” and watch as they move away from Norrin because they think he’s “weird.”
But being alone at the playground gives us both freedom. I can sit down and relax. He can run and flap and talk to himself if he wants. Or I can run around with him rather than hover and worry about him bumping into other kids.
I can cheer him on and tell him what an awesome job he’s doing on the swings. Because I know how much work he put into learning to kick and pump his legs. And he’s free to show off for me. I like seeing him smile with pride.
Being alone at the playground means there is no pressure to play. If there is another child there, Norrin has an option. Sometimes he’ll choose to play and sometimes he’ll say no. I’m okay either way. I know that friendship is precious and I am grateful my son has one or two kids he calls friends. And I love that Norrin is part of a baseball team and has a sense of camaraderie. But I never force friendship on him.
While we have friends and family who care for Norrin, there is a loneliness and isolation to our lives that I’ve learned to accept. Being alone at the playground is not only something I’ve accepted, it’s something I look forward to. And I think Norrin does too. It’s a special time just for us.
Sharing is caring...