You are here: Home / #AutismAwarenessMonth / This is 9. And I Am Scared. 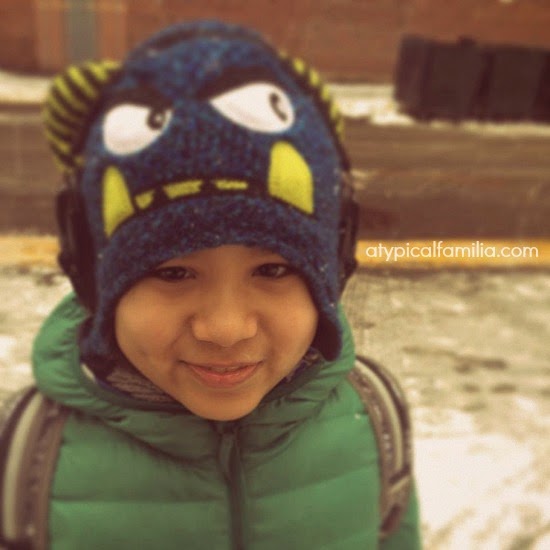 I know comparison is dangerous. And yet it is inevitable. I guess it has something to do with the fact that I am human. But that’s besides the point, that post is for another day…

There’s a boy – I’ll call him, Max – who lives downstairs; he’s a few months younger than Norrin. And I still remember the day I saw him for the first time in the playground with his dad. Norrin was still small enough to fit in the baby swing. Before autism.

I remember talking to Max’ dad after Norrin’s diagnosis. He was one of the ones to assure  me that Norrin will “catch up.”

Max has been my reminder of the gap between typical and atypical. The older the boys get, the greater the gap becomes.

The other day I saw Max throwing away a trash bag of recyclables. A simple chore most wouldn’t even think twice about. He was with his little sister. I watched them cross the street, toss out the garbage and run back up the walkway to our building. And I could see their mother watching them out their first floor window.

I was walking up with the grocery cart and they greeted me by name. And Max knew to hold the door open for me.

Max is younger than Norrin and was already given these small opportunities for independence.

And it made me sad. Norrin turned 9 a few weeks ago and I can’t see him leaving our building by himself anytime soon. Sending Norrin outside to throw away the garbage – even in the hallway seems like a skill we are far from mastering.

People always ask me where Norrin falls on the spectrum. And many therapists have called Norrin “high-functioning.” I’ve always thought of Norrin as being somewhere in the middle. But the older Norrin gets, the middle feels far away.

At 9-years-old, I am still helping him take a bath. He still needs some assistance using the bathroom.

And when it comes to using the bathroom in public, he still comes into the ladies room with me.

He is able to dress independently but still needs some guidance and prompting.

At bedtime, Norrin still prefers to sleep in our bed than his own. And he still wears a pull-up at night.

Our apartment still needs to childproofed. And Norrin can never be left unsupervised. I still find myself pulling things – coins, small rocks, staples or pieces of plastic – out of his mouth.

When Norrin wakes in the middle of the night, I know that I have to be up too because I never know what he’ll do.

Norrin has no awareness of personal space and/or what’s appropriate behavior. (Kissing the woman next to him on the train was cute at 2 or 3 but at 9 – not so much.) He’s a 9-year-old kid who will still try to sit on your lap or reach into your plate of food. It is something that we work on constantly.

And he is strong. When we walk outside, I still hold his hand. When he sees something he likes, he pulls me so hard that I feel my arm will rip out of its socket.

Norrin wants independence. He insists on doing things “all by himself” and often pushes my hand away when I try to help.

When he’s hungry he walks into the kitchen and makes his own PB&J sandwich. Which is great but he’ll sometimes take a dirty knife out of the sink to make it or use a clean knife and return it (dirty) to the drawer.

I have started to see the small signs of puberty. His growth spurts, the faint hairs appearing on his upper lip, the deepening of his voice. We are approaching this new phase full speed ahead. And it scares me.

I am scared of the world we live in and how they will perceive him.

I am scared of the future because I know that I will not live forever.

I am scared of how quickly the time passes and the time it’s taking for Norrin to “catch up.”