You are here: Home / Hispanic Heritage Month / What You May Not Know About Non-Spanish Speaking Latinos

I’m sure many non-Spanish speaking Latinos can relate to this scenerio.

You’re out walking in your neighborhood, in a store or in the subway and suddenly someone asks: habla espanol?

And then you say no and the person asking usually frowns with disappointment and disbelief. Because they see you as someone who looks like them. 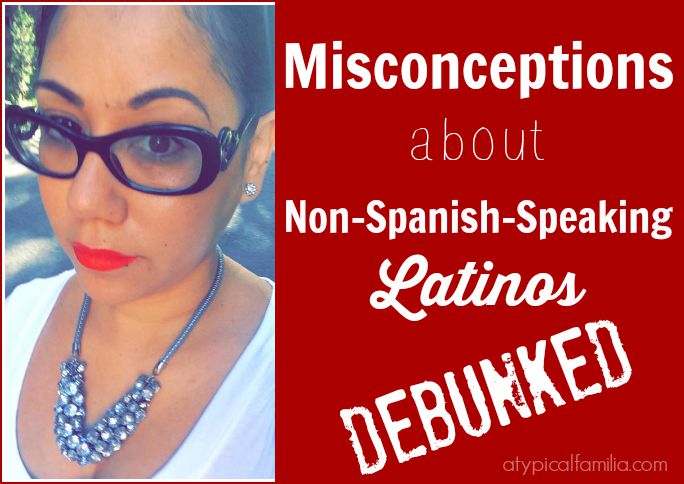 I have judged most of my life for speaking Spanish. Because I look “Latina” and self-identify as Latina, I must speak Spanish. And if I don’t speak it – well, there must be something wrong with me. And not speaking Spanish makes me less Latino than the person who does.

I have struggled with cultural identity for years and I’ve always felt like I’ve never had a place. Dancing between two worlds in cultural limbo.

Growing up in a diverse Latino neighborhood and not speaking Spanish, I’ve been called every name in the book: wannabe white girl, valley girl, gringa, estupida (by an exboyfriend’s mother).

I’ve been asked “How can you consider yourself a Latina blogger if you don’t speak Spanish?“

I’ve even been called an embarrassment to my culture.

It’s Hispanic Heritage Month and I thought I’d debunk some of the misconceptions about non Spanish speaking Latinos like me.

We cannot cook like our mothers (or fathers). One Christmas, I was talking to my coworker about making Christmas dinner. I told her I was making a pernil and arroz con gandules. “You know how to make that?” she asked. I know why she asked. People are always surprised that I can make a pretty impressive pot of arroz con ganudules simply because I do not speak Spanish. Not really sure why, recipes are written in English.

Our parents have failed us. When I tell people I don’t speak Spanish, they usually ask, “Why didn’t your mother (parents) teach you?” It is accusatory, judgmental. It puts me on the defense immediately. Because my mom is a great mother and she raised me to have respect for others, to be honest and hardworking. To have her questioned is hurtful.

We don’t want to learn to speak Spanish. I have yet to meet a non-Spanish speaking Latino who says, “I’m so glad I don’t speak Spanish.” In fact, not speaking Spanish is a significant regret. Learning a language at 3, 4 or 5 is a whole lot different from learning as an adult. As an adult who has tried to learn, it’s difficult. It takes time and practice – a lot of practice. And whom will we practice with?

And then there’s the flip side – when non-Spanish speaking Latinos try to speak Spanish, they’re ridiculed for their pronunciation and accent.

There’s a difference between being corrected and being made fun of. When someone is laughed at for attempting to speak Spanish, it can be discouraging and make the person feel self-conscious.

We cannot understand. Yeah, just because we may not speak Spanish doesn’t mean we don’t understand the language.

I grew up hearing Spanish. Both of my parents speak it, many of my friends speak it. I am pretty good at following a conversation even if I can’t be part of it. I pick up on words, phrases and body language. My parents always switched to Spanish when they wanted talk about me or something they didn’t want me to know about, so I’ve had years of practice of decoding conversation. And I’m usually aware if you start talking about me. Because trash talk is universal.

We are not proud. There is this assumption that if we do not speak Spanish, that we are not proud of our culture. I may not speak Spanish, but I’ve watched documentaries and own dozens of books about Puerto Rico. I’ve studied its history and read its literature. (I have many Spanish speaking friends who do not know the island history, the way I do.)