You are here: Home / Uncategorized / My Kid Got His 1st Trophy. He Wasn’t The Best Player But He Deserved It Just The Same. 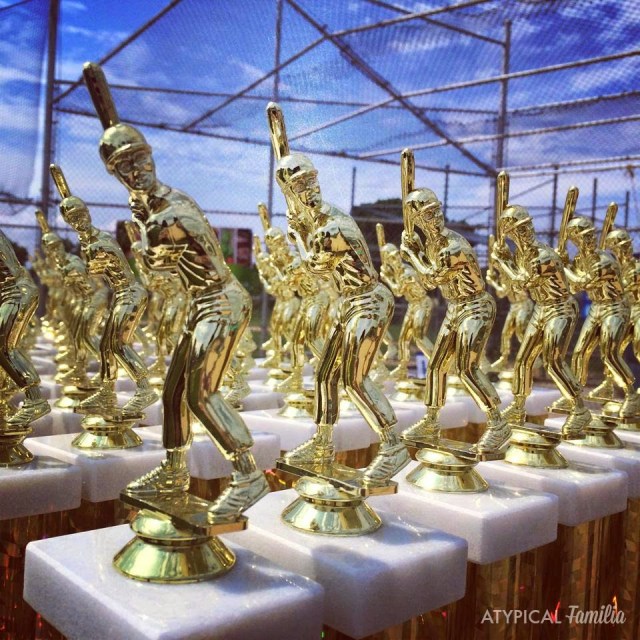 When Norrin was first diagnosed with autism there were so many things I couldn’t see happening. I was stuck in this idea of this is where he is now, and it will always be like this. That was six years ago. Norrin and I have come a long way since then. And I know that where we are now, will not be where we are next year. Norrin may have autism but like every other kid – atypical or otherwise – he is maturing, evolving and learning. Norrin simply continues to amaze me. And when he achieves another milestone – regardless of how big or small – it is a moment worth celebrating.

This past weekend was a major milestone for Norrin. Saturday was his last game of baseball and Sunday was Trophy Day. And every kid got a trophy – including Norrin. It was his first. 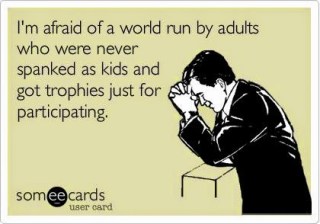 If you’re on social media, I’m sure you’ve seen this meme. It’s pure snark and aimed at parents raising a generation of entitled and unbearable brats who will one day grow up to be total assholes running the world.

For those who have liked and shared the meme. Trust me – I get it (I’ve shared it too). I’ m doing my best not to raise a jerk.

But the “Every Kid Deserves a Trophy” is a subject of great debate. Especially among the typical parenting set.

The helicopter parent is the parent who catches a child not when he crashes and burns, but when he merely scrapes his knee. It is the parent who needs to alleviate every ounce of her child’s anxiety… I define “attaboy” or “attagirl” parenting to be giving constant praise to a child regardless of effort and outcome. This is the parent who preserves her child’s spirit and confidence above all else… I think that we have way too many “attaboy” and helicopter parents today than “pick yourself up and dust yourself off” parents, and in my opinion, that’s taking the easy way out of child rearing. Kelly Trotter King, Every Child Deserves a Trophy…Really? Huff Post Parents (2012) — written in response to a NY Times article, Raising Successful Children by Madeline Levine.

I don’t know what it’s like to raise a typical child. But if I had one, I doubt I’d be a helicopter or an “attaboy” parent. I’m not one now though I suspect I must look like one when at the playground. I may hover, but a helicopter mom I am not. When I cheer my kid on, it’s because I know he needs the encouragement to keep trying – not to boost his ego. And when Norrin starts to tantrum, I am totally okay with letting him cry it out until he calms down.

When you have a kid with special needs, it’s not easy watching them picking themselves up and dusting themselves off after getting knocked down. And there have been times, when I’ve had to look away because my initial instinct was to catch my kid before he crashed and burned. I know that I have to let Norrin fall a few times in order for him to succeed. I want him to be independent as possible. I’m fine with that. And in that aspect, I agree with that parenting philosophy. I don’t think King or anyone else  in the great trophy debate had autism in mind but still…

I’m going off topic. Back to the trophy and why Norrin (and everything other kid on the Bronxchester  Challenger League) deserved one.

When Norrin was first diagnosed, Joseph and I watched as he struggled with so many things ‘typically developing’ boys were doing. I remember Joseph asking every therapist who ever worked with Norrin to focus on things like throwing, catching, jumping and kicking. Joseph – a natural and enthusiastic athlete and like most dads, he wanted to be able to share his love of sports with his son.

It has taken years of therapy to get Norrin to throw and catch a ball and to jump up and down. And he still struggles with his movement and coordination.

We tried baseball last year but Norrin wasn’t especially interested. He had a hard time focusing and didn’t understand the overall concept. And while the kids played baseball, it was a little unorganized and just wasn’t for us.

I was hesitant to try again but I knew the Bronxchester Challenger League would be a different experience. It was exciting to see Norrin in his baseball uniform on his first day. I didn’t mind waking up early Saturday mornings to get him to the field. I sat on the sidelines with the other moms, cheering our kids on.

That first time out on the field, Norrin had a tough time. He wanted to sit in the grass and run around the field. He had difficulty holding up the bat and aiming for the ball – he needed a baseball tee and a lot of guidance. But week after week, he got a little bit better. Week after week, he tried a little bit harder. He was looking forward to playing baseball. He wanted to play catch with Joseph. And by that very last day on the field, Norrin no longer needed the tee. Norrin still had difficulty but he kept trying until he got it (the coaches were patient with him).

Norrin wasn’t the best player on his team, nor the most improved but man did that kid try! Week after week, he tried his best. And week after week, I saw improvement. The trophy he received, wasn’t handed to him because he just showed up. Norrin earned it.