You are here: Home / Uncategorized / My Hero {That Time My Husband Saved a Woman’s Life at Applebee’s}
It’s weird the way life works. How one small decision can make a huge difference. In Joseph’s case, his decision not only made a difference – it saved a life.
Last Wednesday, I got a text from Joseph letting me know he was going out after work for a few drinks with a co-worker. He asked if I had any plans and/or if I wanted to tag along. I didn’t – I wanted Joseph to have a few hours to himself.
And then I get this text… 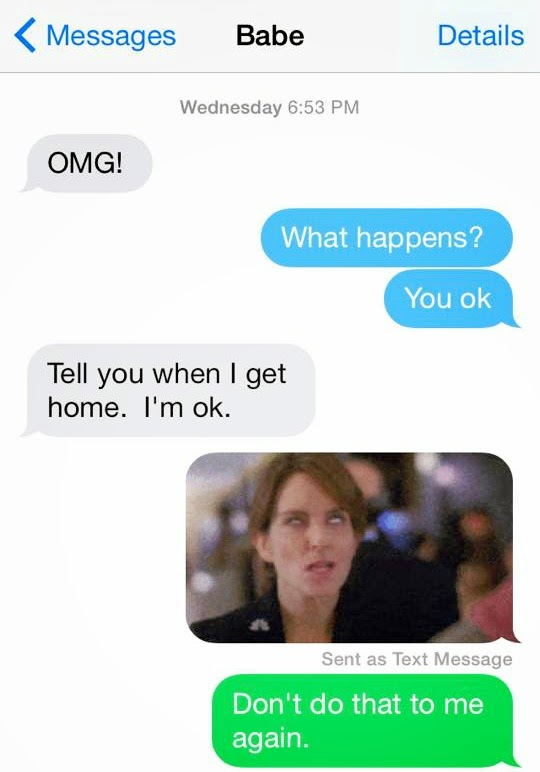 His text freaked me out because he doesn’t do stuff like that. He doesn’t text me OMG and then just drops it. For the next hour or so, I imagined every possible scenario.
When he walked in the door, I could tell that something was wrong. He immediately undressed and said, “I need these clothes to be washed.” And then he said he couldn’t explain what happened until he showered, “I just need a few minutes…”
(I really hate that kind of suspense. Especially after having to wait for him to come home.)

After he showered and threw himself on the sofa, I demanded to know what happened.
Joseph had gone to the Applebee’s by Yankee Stadium with another officer, Matt, after work. After an hour or so, they heard raised voices but didn’t think anything of it – they dismissed it as people being happy at happy hour. But the voices became louder and more frantic.
Joseph turned to see what was going on and that’s when he saw a woman on the floor, her daughter beside her screaming – “My mother is choking!”
A crowd gathered around the woman but no one stepped in to help. Not the manager nor the waitstaff. Joseph expressed that some of the patrons wanted to help but didn’t know how. And I can understand that – in the moment, you are so overwhelmed it’s hard to know what to do.
That’s when Joseph and Matt ran to her side. She was a heavy set woman and Joseph said that she was unconscious and her skin was turning blue. Joseph and Matt lifted her up when another man approached them – they thought he had volunteered to do the Heimlich. But he was there with his phone out and started to record. Matt told the guy to get out of the way if he wasn’t going to help.

Joseph performed the Heimlich while Matt held the woman up. As Joseph is telling me the story, I can see how upset and nervous he is. After a few minutes, he was exhausted and asked for someone take over but still no one stepped in, so he had to keep going. “I wasn’t going to let this woman die on me,” he said.

After a few more minutes, the woman regurgitated and started to breathe again. Joseph saved her life. Shortly after an ambulance arrived and Joseph and Matt returned to the bar. A few of the patrons thanked them.
“Did you get a free meal or drink?” I joked.
“Nope – not even a thank you,” Joseph said. Neither the manager or any of the staff acknowledged what Joseph and Matt had done. “I wasn’t expecting anything to be given to me, I would have paid for my meal even if they offered to comp us. But a thank you would have been nice.”
And I believed him. Because he is that guy. He is the nicest guy I know. The kind of guy always willing to offer a helping hand. He holds doors open, he helps elderly women across the street, he is a good man. He is good for the sake of being good – with no expectations of anything in return.
But yes – a  thank you  would have been nice.
Because I would expect a restaurant chain like Applebee’s to have their employees – or at least the managers – trained in CPR. I would think they wouldn’t want a law suit on their hands, if a patron choked and died while in the establishment. And it’s both scary and disappointing that not a single Applebee’s employee offered any assistance to my husband and his friend.
Joseph doesn’t go out after work often. When he does, he rarely goes to that Applebee’s. And had I wanted to go out with him, we would have gone someplace else. But all these little decisions put him in the path of this woman in need.
Joseph has been a NYS Court Officer for almost five years – his job is to protect and serve. And for as long as I’ve been with Joseph, he has always been my hero and protector. Last week he was someone else’s.
Sharing is caring...